Witness the Spectacular Eta Aquarid Meteor Shower: Find Out Where, When, and How to Watch

While the skies will still be dusky and waiting for dawn to unfold, streaks of shooting stars will light up the sky that even the casual observer will be able to witness its full glory. 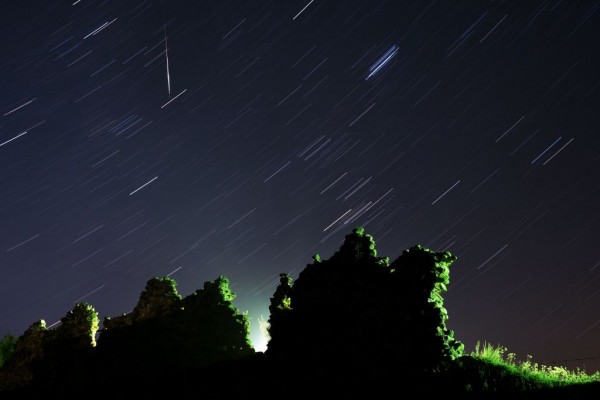 (Photo : SERGEI GAPON/AFP via Getty Images)
A long exposure picture shows a Perseid meteor crossing the night sky and stars trails above the ruins of a medieval castle in the village of Kreva, some 100 km northwest of Minsk, on August 12, 2019.

The Eta Aquarid meteor shower offers a spectacular meteor shower for the month of May. It will be particularly visible before dawn on May 5, according to Bill Cooke, who heads NASA’s Meteoroid Environment Office.

The skies could witness up to 50 meteors per hour during its peak, Cooke told Space.com. This spectacular display will be of medium brightness but the darker the skies, the brighter they will be.

If stargazers want to bask the shower in its full peak, they will be required to stay overnight on May 4 and May 5 and for better viewing, they have to be in an open field where they are away from the city lights that can disrupt the view.

All About the Spring Meteor Shower

This spring meteor shower occurs every year in May, it is only one of the two annual showers caused by pieces of Halley’s Comet. The second one is the Orionid meteor shower which is displayed in the sky during October.

The Eta Aquarids are named after their radiant point in the constellation Aquarius, which is near the vicinity on one of its brightest stars called Eta Aquarii.

However, Space.com noted that the meteors did not came from Aquarius, the placement of the radiant there was only an orbital coincidence and only guides observers to the appropriate point in the sky.

The meteors are remnants of litter left behind by Comet Halley, the most famous periodic comet that passes by every 76 years.

This comet’s history traces back to at least 273 B.C., based on the information provided by NASA’s Jet Propulsion Laboratory. Halley’s Comet also holds historical significance since it arrived in 43 B.C., a year after Julius Caesar was infamously murdered in Rome.

It is worth noting that the Eta Aquarids do not produce as many meteors per hours compared to the Perseid meteor in August that usually shows 50-100 meteors, this also happens to be the most anticipated shower display every year.

However, scientists note that Aquarids are still bright, if not brighter. According to Cooke, the meteoroids or the bright dust grains themselves are only about a millimeter across and it will have no probability of touching the ground.

How and Where to Witness the Display?

Since the meteors will come from Eta Aquarii, viewers from mid-northern latitudes will not witness that much radiance in the sky. Hence, they need a dark-sky site with a relatively clear southern horizon to fully enjoy the display.

If the skywatcher is located near the equator, they will have the best views because the Aquarius constellation is more present in the Southern sky. Observers from Miami will have a better view that those in New York or San Francisco.

To locate the constellation with accuracy and ensure better viewing, here are some of the apps that can guide you:

Cooke recommends the viewer to lie flat on their back and look straight up to enjoy the widest view in the sky.