(Photo : GENE BLEVINS/AFP via Getty Images)
Virgin Galactic’s VSS Unity comes in for a landing after its suborbital test flight on December 13, 2018, in Mojave, California. – Virgin Galactic marked a major milestone on Thursday as its spaceship made it to a peak height, or apogee, of 51.4 miles (82.7 kilometers), after taking off attached to an airplane from Mojave, California, then firing its rocket motors to reach new heights.

Posted on their official YouTube channel, the video was released right after the company announced the reopening of ticket sales. These tickets are meant to bring paying customers (rich ones, anyway) to the edge of space and back, writes Digital Trends.

Here is the video, which also shows how different Virgin Galactic launches its sub-orbital craft compared to how typical launches do it:

In the video, they specifically talk about their style of launch. Instead of strapping the sub-orbital craft to a rocket, they put it onto a so-called “mothership” which takes off a runway not unlike a normal airliner. According to the company, this way of launching is far more efficient and comfortable for the passengers on board.

Once the mothership reaches a predetermined altitude of around 47,000 feet (8.9 miles above the Earth’s surface, it releases the spacecraft where it climbs up to the edge of space at speeds roughly three times the speed of sound. Once the rocket finishes its ascent, the passengers can now unbuckle their seats and float in zero-G for several minutes.

All in all, the entire trip lasts around 90 minutes. If you’d like to purchase Virgin Galactic tickets soon, they will go on sale on February 16th and will require a hefty $150,000 deposit (the entire ticket cost is a massive $450,000), writes Complex. The rest of the price will need to be settled shortly before takeoff.

Richard Branson’s company is one of only a handful who offer paying tourists a chance to go to space-even if it’s for a brief moment. These companies plan to try to make space travel more affordable over the years, though current prices remain out of reach for common folk as of the moment.

Read Also: Elon Musk SpaceX Tourism: Anyone Can Soon Go to Space and It is Thanks to Inspiration4

What’s Next For Virgin Galactic?

Virgin Galactic’s foray into space tourism seems pretty amazing, but it hasn’t always been smooth-sailing for the company during the past few years. For one, they haven’t even launched an actual commercial flight yet aside from the several successful test flights they conducted last year. Among these flights include the one which featured Branson himself. 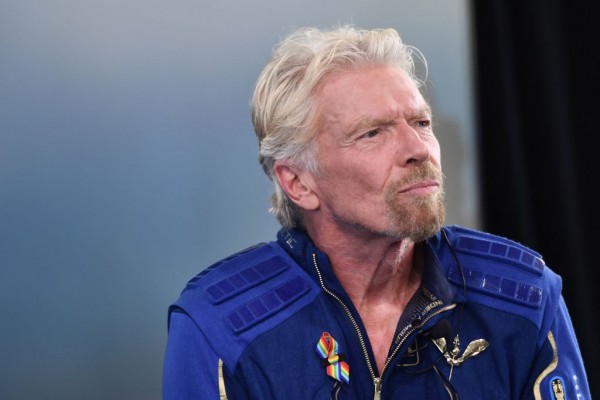 (Photo : PATRICK T. FALLON/AFP via Getty Images)
Sir Richard Branson speaks after he flew into space aboard a Virgin Galactic vessel, a voyage he described as the “experience of a lifetime” — and one he hopes will usher in an era of lucrative space tourism at Spaceport America, near Truth and Consequences, New Mexico on July 11, 2021. – “Congratulations to all our wonderful team at Virgin Galactic for 17 years of hard, hard work to get us this far,” he said during a live feed as the VSS Unity spaceship glided back to Spaceport America in New Mexico.It reached a peak altitude of around 53 miles (85 kilometers) — beyond the boundary of space, according to the United States — allowing the passengers to experience weightlessness and admire the Earth’s curvature.The trip proceeded without drama, and touchdown occurred at around 9:40 am Mountain Time (1540 GMT), about an hour after take-off.

There’s also the fact that they got suspended by the FAA temporarily last July 2021, for a so-called “dangerous mission.” That mission apparently saw “several warning lights” flash on the dashboard of their suborbital craft, but the pilots still went through the mission anyway.

Despite these setbacks, however, it seems the company is pretty confident that they’ll get 1,000 people to buy space tourism tickets this year. That is despite the astronomically high (pun intended) asking price.

Do you have $450K to spare and want to experience going to space? Then maybe this is your golden opportunity.

Related Article: Elon Musk, Richard Branson, Jeff Bezos Plan to Send Tourists to Space and Here’s How They’ll Do it