Venus and Jupiter Will Align In A Dazzling Morning Spectacle; Find out How and When to Watch!

For one special morning, the Moon, Venus, and Jupiter will all meet for one spectacular moment before the sun rises in the sky. 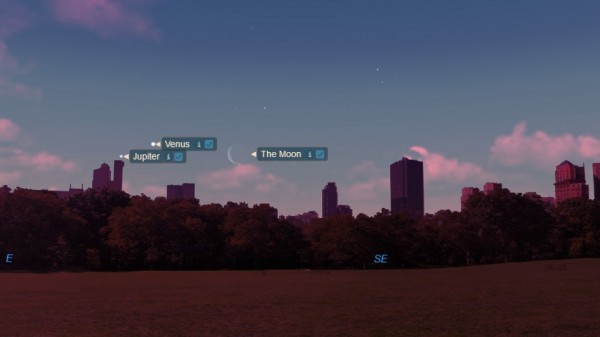 (Photo : Space.com/ Starry Night)
A diagram indicating the location of the moon, Jupiter and Venus before the sun rises on April 26.

Viewers will have to wake up early before the day rolls in to welcome the dazzling display of the brightest objects in the night sky, which will be visible on the morning of April 26.

From that location, you will find the brightest planet Venus hovering four degrees to the upper right of Jupiter. For about a dozen degrees away from Jupiter’s right, you will find a waning crescent moon that is seemingly overlooking the two mingling planets from afar.

According to Space.com, on the next morning of April 27, before the sunrise as well, there will be a “slightly thinner lunar crescent” moon that has moved in to join the two planets, which forms a stunning triangle formation of these three bright objects.

It is worth noting that the moon-Jupiter side will measure four degrees, Venus and Jupiter will seemingly kiss each other, for they will have closed the gap between them to just three degrees, and the moon-Venus side will only measure to five degrees.

Joe Rao, the skywatching columnist of Space.com, noted that these three objects mingling with each other is of course just an “illusion of perspective.” Venus and Jupiter are nowhere near the vicinity of each other since they only happen to align from Earth’s vantage point.

Make sure that for better viewing, there are no buildings, trees, or any huge obstructions blocking the east-southeast portion of this sky. A clear and open morning sky would make this triangular trip a fascinating spectacle to start up one’s day.

“I suspect the combination of the objects’ great brightness, their closeness to one another and their low altitude will induce more than a few people to call local media outlets and maybe even police stations to report a UFO sighting,” said Rao.

However, on April 30, Saturday morning, Venus and Jupiter will be closer than ever since they will only be separated by just one-half degree, which in perspective is similar to the apparent width of the moon. Together, the planets will rise side-by-side, with Venus on the right side and Jupiter on the left.

Venus will be notably brighter because its magnitude will be at -4.1 but Jupiter will shine six times brighter since it will have a magnitude of -2.1.

Telescopes and binoculars are highly suggested in order to enjoy the spectacular views in its full glory, in the coming days around April 30. The two planets will still be close to each other by May 1 on Sunday because Jupiter will be located to the upper right of Venus until in the next mornings to come, the planets will slowly pull away to the west.

Mark your dates, set your alarms, and make your mornings magnificent with these stunning celestial displays!