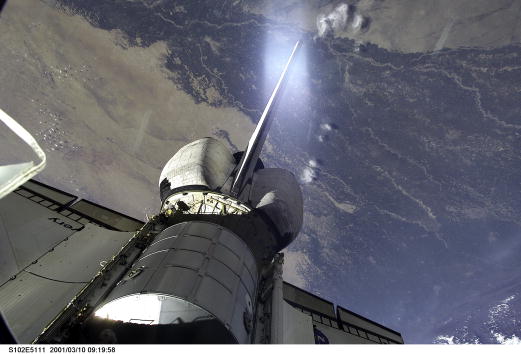 (Photo : Photo courtesy of NASA/Newsmakers)
An out-the-window view of the Leonardo Multi Purpose Logistics Module resting in Discovery’s payload bay was recorded with a digital still camera from the International Space Station (ISS) with Earth in the background, March 10, 2001.

This announcement was made by the defense department since it believes that the area between the planet and its natural satellite is a high strategic priority.

DARPA added that the new nuclear rocket should also be efficient for long-duration spaceflights.

According to Space.Com‘s latest report, the new nuclear rocket under DARPA’s DRACO (Demonstration Rocket for Agile Cislunar Operations) program can help the United States further to observe the space region between Earth and the moon. 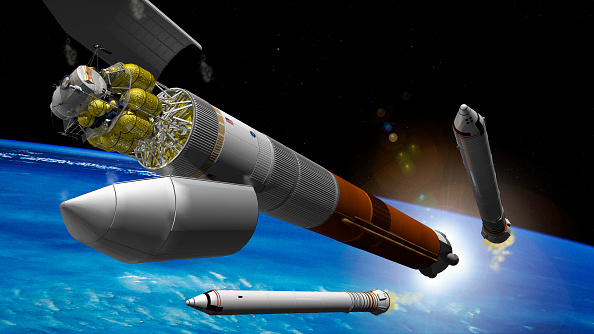 (Photo : Illustration by NASA via Getty Images)
This illustration from NASA, shows the design recommendations for the next generation spacecraft as the rockets break away. NASA Administrator Michael Griffin detailed a mission to the moon during a news conference September 19, 2005 in the newly designed capsule spacecraft propelled in space by attached rockets.

The U.S. development agency added that NASA could also benefit from its upcoming nuclear rocket since it also focuses on achieving long-duration manned space missions.

Unlike the spacecraft used by SpaceX and other space agencies, the new NTP (nuclear thermal propulsion) rocket that DARPA will use has a more efficient thrust-to-weight ratio.

This means that it can achieve around 10,000 times greater power compared to the common electric propulsion-based spacecraft. On the other hand, it is also expected to be two-to-five times more efficient than chemical propulsion.

Will There Be Earth-Moon Space Militarization?

The U.S. military did not confirm if they will use the new nuclear thermal propulsion rocket system for space militarization.

The defense agency clarified that it will only be for monitoring activities and long-duration spaceflight enhancements.

DARPA explained that once the new NTP rocket is completed, it can help the United States to have better government and commercial space activities in the cislunar region.

On the other hand, there’s a high chance that NASA will also use the new NTP spacecraft since the international space union already shared its interests in nuclear rockets as they can bring astronauts to Mars faster and more efficiently.

Meanwhile, the U.S. Space Command said that it plans to use non-traditional sensors for ground and sea missile defense radars.

On the other hand, some experts claim that U.S. defense missile systems are still inefficient against ICBMs.