This Electric Superyacht Could Fly, Sail | ‘Air-Yacht’ with Solar Panels?

This electric superyacht could not only sail the seas, but it could also fly above the clouds, aptly calling itself as the ‘Air-Yacht.’ Not to mention that it sports a lavish luxury design and futuristic features. 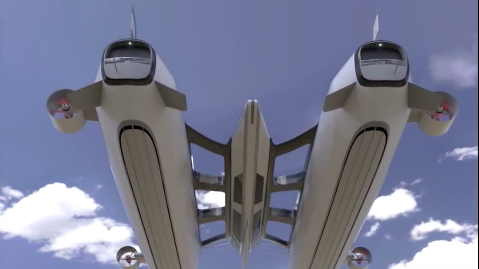 (Photo : screenshot from Lazzarini Design YouTube video )
This electric superyacht could fly and sail packed with tons of solar panels to make it 100% electric.

As per the news story by CNN, the design company from Rome, Lazzarini Design Studio, developed the concept of the Air Yacht, which allows it to “sail” in both the water and the sky.

Although this electric superyacht has yet to be built, the design studio has unveiled its initial renderings, showcasing what we could expect from this luxury sea vessel and aircraft.

The design company revealed that the Air Yacht is made out of carbon fiber material, making its overall body light but rigid.

As mentioned, this Yacht could sail in the skies thanks to its two blimps, which carry compressed helium inside it, giving the vehicle skills to fly the skies for at least 48 hours.

The design team further pointed out that the electric superyacht does fly without any emissions.

On top of that, it would not be a yacht in the first place if it could not float and sail in the water. As such, its designers gave it an “inflatable basements,” which gets filled with air when it approaches the water to make it float.

Due to its fully electric technology, the superyacht also sails the water “quietly,”

According to a report by OICanadian, the massive flying yacht features eight motors, which are powered by tons of solar panels and ultralight batteries, making the aircraft a fully electric vehicle.

The developers of the Air Yacht attempt to make it a “sustainable flying transportation.”

Read Also: 38% of Europe’s Electricity Is from Renewable Sources: What can the US Learn from them?

Air Yacht: How Much Does it Cost?

The massive electric vehicle is actually meant to be owned privately rather than being a luxury public transportation or a tourist vehicle.

However, the interested buyers of the electric Yacht are required to be excessively rich to even afford this.

It is worth noting that the Air Yacht houses ten luxury passenger suites. The master suite, which is found in the main hull of the vehicle, flaunts its own swimming pool, along with a dining and living area.

The luxurious and spacious design of the superyacht, along with its novelty flying features, does not come in a cheap price tag.

Lazzarini, the firm behind the concept, estimates that the cost of the Air Yacht could approximately reach a whopping $621 million or €550 million.

Currently, the spokesperson of Lazzarini admitted to a report by CNN Travel that they are still looking for folks who could invest in the project to make the concept a reality.