Stratolaunch brings its largest aircraft up to date for its fifth test flight, and the “Roc” completed as much as five hours over the Mojave Desert to prove that it is a capable vehicle for mass transportation. The Roc is an enormous plane, and its cabin alone is twice the size of regular ones, with two bodies of an airplane sharing the same wings and engines. 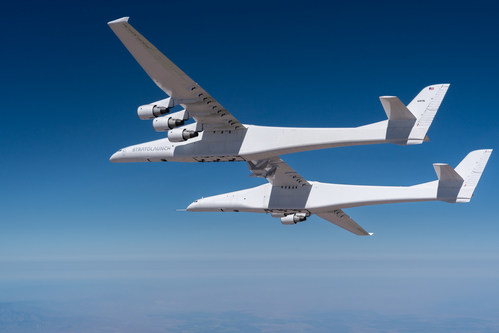 Imagine two birds hovering in the air and not flapping their wings, and are wing-to-wing on each other as if they are carrying the load of the other for both of their sakes. That is what a Stratolaunch Roc looks like, and the company boasts of an aircraft that features hypersonic capabilities for a more streamlined flying experience.

Note that the company uses “hypersonic” instead of “super” as it is one powerful aircraft whose designs take on the name.

Stratolaunch announced that its Roc aircraft is capable of more things in the coming years, and its development already took them to where they are now. The Roc completed a total of five hours for its flight over the Mojave Desert, and the company celebrates this milestone as it is also the fifth flight of the aircraft.

When will Stratolaunch’s Roc Become Operational?

Stratolaunch’s Roc is giving the promising public results on its test flights, and it will lead to one thing: the company’s end goal is to provide mass transportation for all. However, the company did not emphasize much on its operational status for the Roc, and when it will be available for public access.

NASA is one to develop many aircraft technologies to bring the experience to the public, and it is with the many fields of science to help it take on a better platform. That platform is breaking the speed of sound and going supersonic during flights.

One of the best examples here is Lockheed Martin and NASA’s X-59, a low-boom supersonic aircraft that is still under testing and development, with a previous promise of a 2021 flight.

However, it is not only Lockheed Martin that brings this technology to the world; it is also with Sir Richard Branson’s company, Virgin Galactic. NASA and Virgin also came together to get a supersonic aircraft that can travel from New York City to Shanghai, China, in under 40 minutes, a significant decrease in travel time.

Now, supersonic flights are a thing of the past, and Stratolaunch is bringing a hypersonic aircraft that can mass transport people from one place to another with its massive plane. It does not stack two cabins at one or have a double-decker plane. It brings a side-by-side experience for the passengers in one flight, one of the main focuses of its development.

Related Article: Flying Whales Creates An Airship That Can Pickup and Drop Up to 66-Ton Cargo Mid-Air Without Landing