‘Star Wars’ Day: Can We Build The Millennium Falcon ? Here’s What The Science Says

It’s “Star Wars” Day yet again, and many fans of this now iconic IP are showing their love for it in any way they can. Be it having a movie marathon, adding stuff to their collection, or playing video games – every fan is itching once more to revisit the Galaxy Far, Far Away.

But for this year’s celebration, we’re taking a bit of a more realistic approach. In this article, we’re going to find out if it is possible to build a real-life, working Millennium Falcon – and what the science says about it. So, off we go to do the Kessel Run! 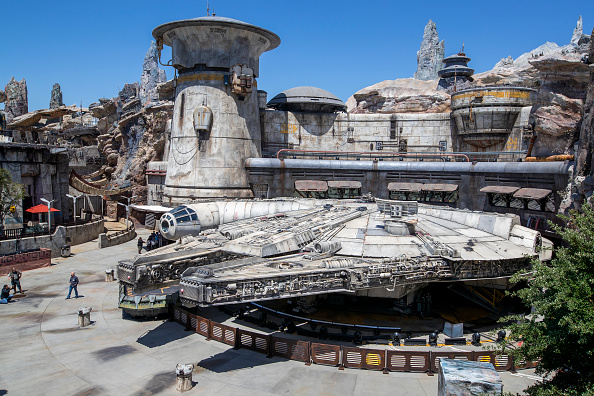 (Photo : Allen J. Schaben / Los Angeles Times via Getty Images)
ANAHEIM, CALIF. — WEDNESDAY, MAY 29, 2019: Media members get a preview of the Millennium Falcon: Smugglers Run where visitors can operate “the fastest hunk of junk in the galaxy” on a daring flight as a pilot, engineer or gunner during the Star Wars: Galaxy’s Edge Media Preview event at the Disneyland Resort in Anaheim, Calif., on May 29, 2019.

Let’s start off by being brutally realistic: no, we cannot build a real-life, working Millennium Falcon, even with our own advanced technologies. However, Space.com did say that our tech is getting closer and closer to the possibility of building one.

But to learn if it is possible to make one, we need to take a closer look at what exactly makes the Falcon the iconic ship it is.

Can We Make A Hyperdrive?

It’s good to know that even in the fictional universe of “Star Wars,” some fantastical pieces of tech are still grounded in reality – well, sort of. Case in point, the Falcon’s hyperdrive.

The hyperdrive is what allows the Falcon (and every other ship in “Star Wars”) to travel the entire galaxy at light speed. Now, physics states that the speed of light is the fastest thing in the universe, and nothing else is faster than it. But the problem is that if you try to make something go at the speed of light, it can be pretty darn problematic according to Einstein’s Theory of Relativity.

Anything that goes as fast as light will have its mass multiply to infinity. You can’t have infinite mass as obviously, you won’t survive. Aside from that, moving something that fast would also require an infinite amount of energy to move forward. There’s no single power source in the universe capable of doing that.

But it does seem that the hyperdrives in “Star Wars” does make use of something that theoretically exists within the universe: wormholes. This phenomenon tells of a hole within the fabric of spacetime that connects two distant points together and shortens the distance you have to travel between them.

In “Star Wars,” engaging the hyperdrive on the Falcon seems to throw it into something that looks like a tunnel through space, allowing it to instantaneously travel to anywhere in the galaxy located light-years away.

However, the problem with that is twofold. One, we haven’t proven the existence of wormholes yet. Two, if a wormhole did exist, going through it will require some form of technology to stabilize it enough for safe passage, writes LiveScience. Stabilizing a wormhole would likely require a very exotic material, and it is not sure whether that thing even exists.

So in short, no, we cannot build a hyperdrive.

Ah, Chewie loves this game – just don’t beat him or he’ll rip your arms out your sockets! Holochess is one of those ideas that spring up when you talk about “futuristic” tech. But while this tech sounds fantastical, you’d be surprised that it already exists in the form of augmented reality or AR!

In fact, some astronauts have already tried it on the ISS before. Back in 2016, a couple of Microsoft’s HoloLens AR headsets were delivered to the station for research purposes. With the headsets, NASA and Microsoft hoped to reduce the time of training astronauts have to go through. Aside from that, there’s also the hope that the headsets would give scientists something that will help them study the long-term viability of deep space missions.

Now, just modify AR tech onto a chessboard, and you’ve got holochess.

The Millennium Falcon’s invisible deflector shields are what keep it safe from direct attacks, even if it is a little like a piece of junk (sorry, Han). In another surprise, you’d be hard-pressed to believe that scientists and engineers are already working on such a technology.

A team of students from the University of Leicester used plasma to design a deflector shield concept, which they say is good enough to protect against almost anything. According to CNET, the students took cues from a real-life deflector shield: the Earth’s ionosphere, which already protects the planet from waves of radiation and other terrible stuff that could wipe out all life on its surface.

However, the deflector shield concept has one terrifying catch: it’s going to blind anyone using it. It can get technical pretty quick, but the gist is that the shield will be able to deflect even light – leaving anyone inside the force field unable to see anything outside. So, good luck firing your planet-killing Death Star cannon – because you won’t hit anything.

The Quadex Power Core is another vital component of a sci-fi ship for a simple reason: it provides immense amounts of energy in a tiny package. This technology is pure fiction, and is far beyond the capability of modern human tech. It is scientifically impossible to fit as much power as you can in something that could fit inside an X-Wing or TIE Fighter.

And if the Quadex Power Core is actually revealed to be a source of infinite energy, then that makes it even more impossible to build – let alone the Millennium Falcon itself.

The United States’ DARPA (Defense Advanced Research Projects Agency) is one of the forerunners of laser cannon tech. They’re closest anyone has ever been to building a real-life laser projectile weapon, and they’ve even already demonstrated it years before.

Here is a video of the so-called Laser Weapon System (LaWS) in action:

The cannon, which was tested on the US Navy ship the USS Ponce in the Persian Gulf, was able to fire a 150-kilowatt laser beam, writes The Defense Post. It’s still not close enough to the Falcon’s quad laser cannons that Luke fires from a turret, but hey, progress!