The SpaceX‘s Crew-3 Astronauts have landed on Earth and they just had the ride of their lives! 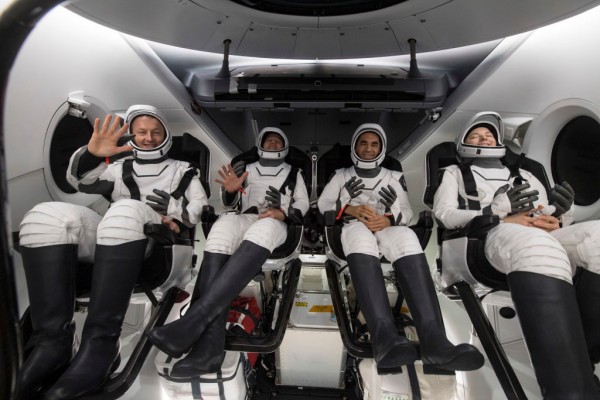 (Photo : Aubrey Gemignani/NASA via Getty Images)
TAMPA, FL – MAY 06: In this handout photo provided by NASA, (L-R) ESA (European Space Agency) astronaut Matthais Maurer, NASA astronauts Tom Marshburn, Raja Chari, and Kayla Barron, are seen inside the SpaceX Crew Dragon Endurance spacecraft onboard the SpaceX Shannon recovery ship shortly after having landed in the Gulf of Mexico on May 6, 2022 off the coast of Tampa, Florida.

In the course of six months, they faced space debris, welcomed the very first fully private mission to the International Space Station (ISS), and came back home to witness a conflict in the international relations scene. Indeed, it was an epic ride for the crew.

📽️ Live now! Crew-3 is talking about coming back to Earth after their @Space_Station mission.

The astronauts docked with the ISS on Nov. 11, the moment they arrived in space they already encountered a constantly changing environment. In Nov. 16 alone, a Russian anti-satellite test caused a cloud of debris that forced the astronauts to protect themselves in the SpaceX Dragon capsule Endurance.

Crew-3 pilot and veteran NASA astronaut Tom Marshburn recalled during a live streamed press conference on Wednesday, that “scared would be the wrong word” to describe how they felt during that encounter.

The conference was held five days after the successful splashdown of their spacecraft off the coast of Tampa, Florida together with other NASA astronauts Raja Chari and Kayla Barron, and the European Space Agency’s (ESA) very own Matthias Maurer.

Marshburn recalled that during their “shelter in place” procedures, they tried to stay calm despite the overwhelming fear. Thankfully, they were able to successfully execute the procedure since it was what they were trained for.

“I think ‘acting with a purpose’ – that’s what we were doing,” Marshburn said.

Read Also: SpaceX: Humanity will Land on Mars In This Decade

“We Are All Living Together”

Once they landed on Earth, the astronauts were of course not spared from questions about Russia’s invasion in Ukraine, which occured on February 24.

However, despite the condemnation that Russia faced, its work on the space station still continues.

For Marshburn, nothing has changed at all for their partnership with Russian colleagues, noting that they had a “40-plus year relationship” with Russian and other international partners. The astronaut was alluding to the joint Apollo-Soyuz Test Project mission back in 1975.

“In my opinion, one of the greatest legacies of the space station will be that we are all living together ⁠- all the international partners together,” he said.

“We’re doing what I believe to be great things. And we rely on each other for our survival. So, on the space station, that has not changed at all,” Marshburn added.

He also acknowledged the contributions of the Ax-1 crew, which is Axiom Space’s effort to send private astronauts to the ISS. Mashburn said that Crew-3 was in awe of the “gracious and kind” Ax-1 astronauts.

Overall, he recalled that their experience with Ax-1 astronauts was “extremely positive” and that they “enjoyed getting to know them.”

Mashburn’s crewmates were all rookie astronauts, which could only mean that they were all giddy and excited for their first experience in space.

1st spacewalk didn’t disappoint & worked w/ @NASA classmate Kayla Barron installing new solar panel structure on @iss. Cameras don’t do it justice, but do give sense of how hard it can be to concentrate when there’s so much to look at. pic.twitter.com/USQPIFOiVv

ESA astronaut Maurer said that the mission had everything he had hoped for – such as “outstanding launch, perfect mission,” and  “with a lot of science in between.”

Baron shared that she was in awe of how their training came to fruition once they were in ISS.

“It was just this awe-inspiring experience and incredible honor to represent the NASA team and family,” she said during the conference.

Crew-3’s commander Chari was also in awe of the member’s teamwork and shared a fun anecdote that he participated in “Mustache March” while he was in space. Chari is a U.S. Air Force Colonel and he took part in the tradition to pay tribute to Robin Olds – a Vietnam-era ace fighter pilot who kept a handlebar mustache and defied grooming standards during his time.

He kept his handlebar mustache while he was in orbit. However, he had to shave it before landing because he said that his wife would not tolerate it and joked that “it would also throw off the Dragon center of gravity,” if he kept it.