SpaceX will have a presentation for the Starship next week, and it will feature both the Stainless steel spacecraft and its Super Heavy Booster rocket on a full-stack. CEO Elon Musk confirms this and invites people to the showcase on Thursday next week, live on Starbase, Texas, to update the spacecraft.

SpaceX Starship Presentation will be on Full Stack with Super-Heavy 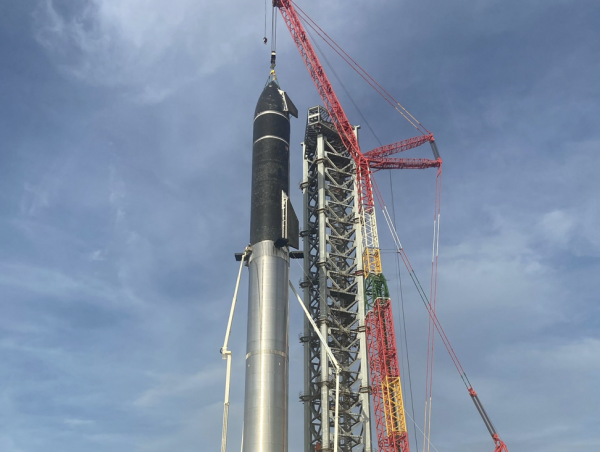 (Photo : Elon Musk via Twitter)
A Full Stack of the Starship and Super Heavy Rocket Booster is coming to a presentation in Starbase, Texas, next week Thursday. Elon Musk discusses the importance of the Stainless Steel spacecraft for the Mars mission and having a multiplanetary life.

Elon Musk discussed this a lot earlier today on Twitter, and it happened after the successful launch of the Falcon 9 to mark a milestone for the older rocket. In the discussion, the CEO and billionaire said that the Starship would do better than the Falcon 9 and be the “holy grail of rocketry” once it is operational, focusing on its reusability.

The specific features and functions of the Starship make it an essential spacecraft for the Mars mission, necessary to build a “self-sustaining city” on Mars. Moreover, Musk then again discussed multi-planetary life that would only be possible with the Starship and its missions that would soon begin, focusing on its flight towards the Red Planet.

Starship aspires to be the first fully reusable orbital launch vehicle, the holy grail of rocketry.

This is the critical breakthrough needed to make life multiplanetary.

After which, Musk confirmed that there would be a SpaceX presentation for the Starship and its Full Stack partner, the Super Heavy Booster rocket. The event will happen next Thursday, February 10, at 8 PM Texas Time.

It is unknown if SpaceX and Musk would make it available on a live stream, significantly as this showcase will feature only the Starship and not its flight.

SpaceX’s Starship waited for its environmental license deliberation and approval from the Federal Aviation Authority (FAA) for its upcoming test flights to happen on Starbase Texas. The agency asked for the approval of residents from Boca Chica and other concerned citizens if SpaceX should continue for their flights and missions for the Starship.

Towards the latter half of 2022, Elon Musk and SpaceX talked about the environmental assessment that the FAA would conduct and it involved the public’s opinion for it. The evaluation came upon mixed sentiments from people, and it hindered the FAA from giving SpaceX its needed license and approval to test the Full Stack.

Instead of finishing the assessment by December 31, 2021, the delay reached January, and the FAA pushed the licensing to February. The launch will soon happen, says the company, and SpaceX will first showcase the Starship for the public to see.

Nevertheless, SpaceX fans and enthusiasts will see the Full Stack of the Starship and Super Heavy by next week Thursday, after several months.