SpaceX: Humanity will Land on Mars In This Decade

Humanity might soon be taking its first footsteps on the Red Planet! 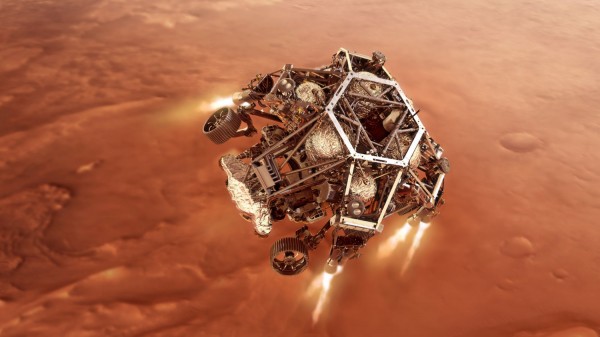 (Photo : NASA via Getty Images)
UNSPECIFIED: In this concept illustraion provided by NASA, NASA’s Perseverance rover fires up its descent stage engines as it nears the Martian surface to land in the area known as Jezero crater on the planet Mars. A key objective for Perseverance’s mission on Mars is astrobiology, including the search for signs of ancient microbial life.

In an interview with CNBC‘s Shepard Smith, SpaceX President and Chief Operating Officer Gwynne Shotwell revealed that astronauts will be landing on Mars’ surface before the end of the 2020s.

“We should put people on the surface of Mars, within a decade,” she added “I think it will be in this decade, yes. People on the moon, sooner,”

“I think we need to get a large delivery to the surface of Mars, and then people will start thinking harder about it, “And then, I think within five or six years, people will see that that will be a real place to go,” the President and COO said.

Her interview with CNBC will be part of “Inspiring America: The 2022 Inspiration List,” which will be aired this weekend across NBCUniversal News Group television networks including their streaming platforms as well.

SpaceX has made it clear from the very start that they want to make this ambitious vision a reality. In fact, the rocket company is currently developing a huge, reusable rocket-spaceship  combo which is called Starship.

Starship is expected to deliver people to travel to the Moon, land on Mars, and explore other places in the universe.

It is worth noting that this spaceship has already been sent to several moon missions. In 2018, Japanese billionaire Yusaku Maezawa used the vehicle to casually travel the moon on a round trip, with a target launch set at 2023.

Most notably, NASA chose Starship to send its first crewed lunar lander for their Artemis program, which aims to put astronauts down within the moon’s south pole in 2025.

The space agency envisions Artemis as a spaceship that can travel from Moon to Mars and they look forward to launching a crewed Red Planet mission in 2040 or in the coming years.

SpaceX is already working on a possibly big milestone for Starship’s development, which is the vehicle’s very first orbital test flight. The space company is planning to launch the ship from its South Texas facility called Starbase, in the coming years.

However, the launch cannot commence any sooner until the U.S. Federal Aviation Administration finishes the environmental activities assessment at Starbase.

Unfortunately for Starbase, a recent report released this week found that the company’s expansion might be uncertain after the U.S. Fish and Wildlife Service said that the business enhancement activity could risk the state of endangered animals in the area.

SpaceX must check the effects of their expansion and limit their construction activities in the area, as suggested by The Fish and Wildlife Services if they want to get the official green light from the FAA.

Jared Magnolis, a senior attorney with the Center for Biological Diversity said that, “This is a company with a very deep pocket. The least they could do is address these harms in a meaningful way.

The review was originally planned to be finished by the end of 2021, however, the FAA pushed back the completion several times and the most recent push back is on May 31.