Solar Cells That Work Even at Night

Technologies like wind turbines and solar cells have been touted as alternative energy solutions that could alleviate our dependence on fossil fuels.

However, so far, these technologies have proven to be inefficient, or in the case of solar power, the problem has been that the technology generates power only during the day when there is sunlight.

That has changed. Researchers from Stanford University invented solar cells that work even during the night. 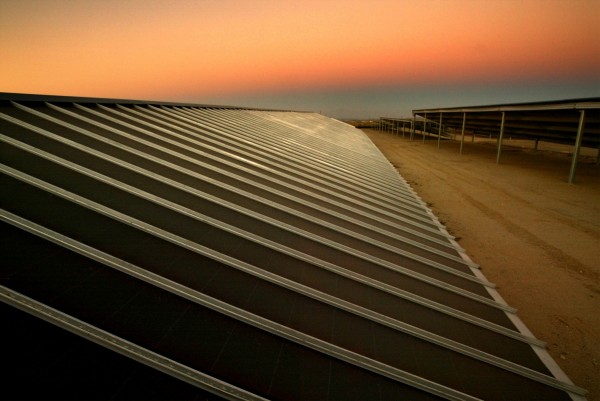 (Photo : David McNew/Getty Images)
TAFT, CA – JULY 8: Night settles over solar panals at Solarmine, the first solar photovoltaic facility in California to help power oil field operations, on July 8, 2003 near Taft, California, 40 miles west of Bakersfield. Solarmine is a new six-acre demonstration project installed by the ChevronTexaco subsidiary, Chevron Energy Solutions, (Chevron ES) in collaboration with United Solar Systems Corp. (Uni-Solar), a subsidiary of Michigan-based Energy Conversion Devices, Inc. (ECD). Producing 500 kilowatts of electricity, it is one of the largest photovoltaic installations in the United States and the largest array of flexible, amorphous-silicon solar technology in the world. Unlike glass-based photovoltaic systems, the amorphous-silicon technology-based panels can withstand direct impact and puncture without compromising their ability to generate power. The 4,800 flexible, current-producing solar panels are about 1.3 feet wide by 18 feet long and are mounted on metal frames that resemble car ports.

According to a report from Earth.com, solar cells radiate and lose heat to the sky during the night. According to the researchers, the technology they developed uses a thermoelectric module to create voltage and current from the temperature gradient between the cell and the air. The system’s thermal design comprises both a hot and cold side.

Sid Assawaworrarit, co-author of the study, explained, “You want the thermoelectric to have very good contact with both the cold side, which is the solar cell, and the hot side, which is the ambient environment, if you don’t have that, you’re not going to get much power out of it.”

The authors further added that In the day when there is plenty of sunlight, the system works in reverse and contributes the additional power generated to conventional solar cells.

The device generates 50 milliwatts per square meter, lighting at night requires a few watts of power. This means that for lighting you would need 20 square meters of photovoltaic area.

Read Also: The Department of Energy Funds a Project Aiming to Recycle Discarded Solar Panels-But How Much Will it Cost?

A report from Scitechdaily states that millions of people around the world lack electricity access at night. Usually, conventional solar cells generate electricity during the day when there is sunlight and would need battery to store the electricity generated.

This system would allow millions of people  around the world to have access to a simple technology that lets them generate electricity even during the night without the need for batteries.

The system is simple and inexpensive to setup, which means incorporating it with existing solar cells is possible. Also, due to it being inexpensive, it could be built in remote areas with limited resources.

Made from simple components

The team’s goal is to improve on the insulation and thermoelectric components of the device. They are studying ways to engineer improvements to the solar cells  to improve the performance of the system.

Related Article: Want To Cut Your Electric Bill? This Solar Paint Could Do The Trick