Alas, the helicopter has plucked the booster. The thrilling attempt was a success! 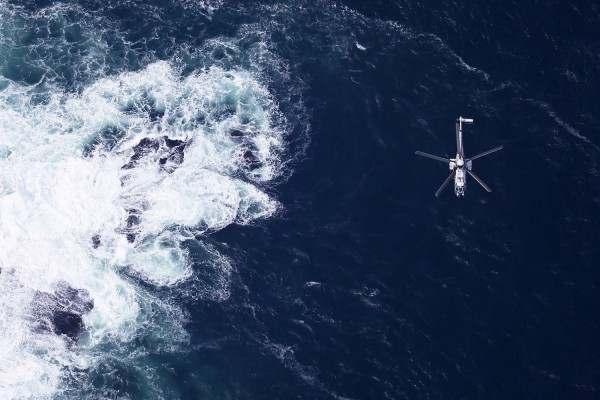 (Photo : STR/JIJI PRESS/AFP via Getty Images)
This aerial view from a Jiji Press helicopter shows a Japan Coast Guard helicopter searching near the coast of the northern Japanese island of Hokkaido on April 29, 2022, where a distress signal was made by the sightseeing boat “Kazu 1” on April 23.

After almost three years of preparation, the satellite launch company Rocket Lab has finally attempted to catch one of its rockets, shortly after the vehicle was propelled to space.

When the Electron rocket fell back to Earth, the helicopter caught the booster and dropped it in the ocean afterward.

During the launch livestream, communications representative for Rocket Lab Murielle Baker said that the pilot offloaded the successful splashdown at his own discretion. The rocket was recovered by their vessel to be transported back to Rocket Lab’s factory.

“The stage is in great condition though, and we look forward to assessing it in detail when it’s back here in the factory, ” Baker said.

The launch followed its initial plans and deployed all 34 satellites.

This happens to be the first time that Rocket Lab attempted to snag its rockets, which is a part of the company’s plan to recover and reuse its vehicles right after they were launched. The Electron was built to propel batches of small satellites into low Earth orbit.

Once the Electron is launched to space, computers in the vehicle will guide the booster back through Earth’s atmosphere and manuevers it in the proper way to stay intact while falling to the ground.

When the rocket reaches an altitude of about 3.8 miles up, a drogue parachute will be deployed to slow down its speed, followed by a main parachute. The helicopter will enter the scene with a dangling hook to pluck the rocket before it splashes down towards the ocean.

The company’s recovery plan has been on the works since 2019, particularly when it announced that it will make its Electron rockets reusable. The first test commenced in December 2019 to study the guidance and control system of the rocket.

In a statement released in a report by The Verge, Rocket Lab CEO Peter Beck said that guiding the rocket was the most challenging part in the entire process, he said, “I think a lot of people think the hardest thing is catching the rocket, and that it certainly is hard.”

“But really, from an engineering standpoint, the hardest thing has been making sure the rocket survives through the reentry,” he added.

It is worth noting that the rocket can reach a speed of more than 5,000 miles per hour while it falls back to Earth, Rocket Lab needs these rockets to stay intact and would not be compromised by the hot-plasma building up around the vehicle.

The entire excursion was named “#ThereAndBackAgain”, it was conducted to use the booster on their various projects, one of them is the 59-foot-tall two-stage Electron and for a variety of future missions bound to space.

By catching and reusing these rockets, Rocket Lab aims to decrease the manufacturing cost with building a completely new rocket for their missions. This goal is very similar to SpaceX, known for landing and reusing its rockets after the flight.

Rocket Lab was successful in the attempt and retrieved three rockets out of the water to further study their journeys back to Earth.