In tandem with the Space Research Organization in India (ISRO), researchers at the Indian Institute of Science (IISc) have uncovered a potential method for building actual structures on the surface of Mars. The research was first published in the PLoS ONE journal last week on Apr. 14, highlighting how scientists not only developed this new potential building block but likewise put forward their own proof-of-principle prototype behind the endeavor.

Coined bacteria bricks, or as the team itself likes to call them, “space bricks,” this blend of various materials forms a cement-like combination that could theoretically be used to enhance Martian citizenship and allow humans to more properly formulate long-term visits to Mars. The mixture uses nickel chloride, bacteria called Sporosarcina pasteurii, a gel known as guar gum, and an in-house developed Martian soil replicant to form the mold-like clay foundation.

The team of researchers used a simulant form of Martian soil, given there is no real extract currently on Earth. According to the scientists, though, this Martian soil simulant is almost identical to its real-world counterpart, microbes of, which allowed the team to unearth a sticky material from its secretions called biopolymer alongside calcium carbonate crystals from the urea conversion. 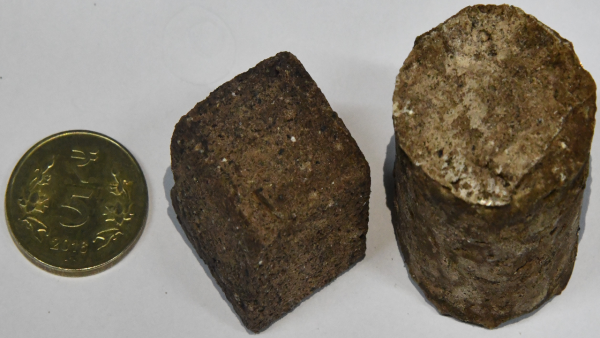 “Martian soil contains a lot of iron, which causes toxicity to organisms. In the beginning, our bacteria did not grow at all. Adding nickel chloride was the key step in making the soil hospitable to the bacteria,” explains one of the paper’s senior authors, Aloke Kumar, an associate professor under the IISc’s Department of Mechanical Engineering.

The team merely shaped the final microbial cement-like goop into actual building blocks to allow for a more contemporary structure to be made with it. The researchers noted this method of “space brick” creation to reduce the potential of holes, or porosity, in the Martian soil, which is a major issue in using actual Martian soil.

“The bacteria seep deep into the pore spaces, using their own proteins to bind the particles together, decreasing porosity and leading to stronger bricks,” adds Kumar in a press release.

The team first came up with the concept amidst previous research schemes into lunar bricks for potential future moon bases. While the moon rocks proved useless, given the cylindrical shape they could only be formulated into, the team’s pivot into Martian building blocks was seemingly a no-brainer. The Martian bacteria bricks made by the team can, unlike their lunar predecessors, be molded into practically any form of shape necessary, allowing colonizers a slew of potential in building out structures on Mars – if, of course, said space bricks are functional on the planet.

Given the ever-expanding efforts in aerospace research and deep space flight considerations, much of which has been put forward by SpaceX’s Elon Musk, designing more practical ways to create life-sustaining buildings on Mars is an utter necessity. The research team has plans to ship off some of their newly developed space bricks in future missions under the ISRO so as to test the viability of their concept in space-based conditions, like microgravity.

In the meantime, the IISc researchers are constructing their own Martian-like chamber that will supposedly simulate similar atmospheric realities felt on the big red planet. This will allow the team to likewise test their space rocks in the 100x-thinner atmosphere of Mars when compared to earth, as the chemical nature of the planets are vastly different and could counteract the bacterial construct the team made.

Read Also: NASA’s InSight Mars Lander Showcased this Unique Martian Sunrise and You Should Not Miss It