Pete Davidson to Join Jeff Bezos on Next Blue Origin Flight; Leaks Say It Will Happen in Late 2022

Pete Davidson may be the next media personality that will join a flight to orbit, and it will be with tech CEO Jeff Bezos on an alleged claim later this 2022. Leaks say that the two have already met to discuss the next space flight that will invite the SNL star on the New Shepard for its next launch, but there has not been an official confirmation for this venture. 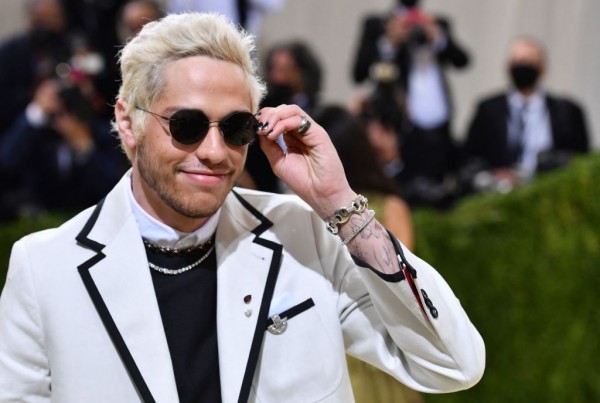 (Photo : ANGELA WEISS/AFP via Getty Images)
US actor-comedian Pete Davidson arrives for the 2021 Met Gala at the Metropolitan Museum of Art on September 13, 2021 in New York. – This year’s Met Gala has a distinctively youthful imprint, hosted by singer Billie Eilish, actor Timothee Chalamet, poet Amanda Gorman and tennis star Naomi Osaka, none of them older than 25. The 2021 theme is “In America: A Lexicon of Fashion.”

According to a report by Page Six, Pete Davidson and current girlfriend, Kim Kardashian, were spotted by reporters on Jeff Bezos’ Los Angeles home with his lover, Laura Sanchez. Allegedly, this meeting is about Davidson’s role in the next spaceflight of Blue Origin that will include him on the flight manifest to see the world from another perspective.

The leakers describe the actor and comedian as excited about the upcoming event, but there are no contracts that seal the deal for both parties. Bezos and Davidson hit it off in the recent meeting that sources say are only pointing to his involvement in the next spaceflight of the private space company.

Blue Origin is reportedly upgrading its New Shepard to bring more flights, focusing on many missions that it could endure for its future ventures. Some reports concentrate on Blue Origin’s additional flights this 2022, with one involving Davidson and Bezos going alongside to venture to new heights for the spacecraft.

Blue Origin completed its first spaceflight when they launched the New Shepard spacecraft, with Jeff Bezos joining its venture to orbit, bringing his space dreams to life. Since then, the company invited several Hollywood actors and personalities to join them, and they remain to have no reason for this venture involving the big names in the industry.

One of the most famous passengers here is the actor that played “Admiral James T. Kirk” in the original “Star Trek” series, William Shatner. The actor was among the first civilians and artists that came to space and experienced the spaceflight for himself, addressing the experience as a one-of-a-kind venture that he did not think he would get to see for himself.

Blue Origin and Bezos also invited multi-Oscar winner and veteran actor Tom Hanks in one of its flights, but the latter declined the offer.

Bezos’ space company focuses on more flights to bring different people to orbit while testing its rocket’s capabilities to bring humans higher than before. The company is preparing for its new spaceflight this year, and it would invite the American actor and comedian, Pete Davidson, to a flight with the company, along with its CEO.