All it takes is a simple screenshot of a one-dollar bill, and the nascent realities underpinning US animal testing are brought into the limelight through a new and powerful tool developed by the likes of People For The Ethical Treatment of Animals (PETA). The organization aptly relays its stance on the cruel and inhumane testing procedures being wrought on owls, dogs, cats, and more with a firm “The buck stops here.”

Through the help of augmented reality technology, PETA is blowing the gasket on these animal testing procedures that American taxpayer dollars are being utilized for without the knowledge of the public. PETA shares a QR code that users can scan with any form of a US bill, from $1 to $50. Each bill will highlight in loud concession the realities of where taxpayer dollars truly go in regards to the still ongoing and cruel animal testing in America.

“Many people don’t know that their hard-earned tax dollars are enabling twisted animal experimenters who have pseudo-science agendas and hearts of coal,” says Kathy Guillermo, Senior Vice President under PETA. The organization has long forwarded the necessity of keeping all animals safe and secure. Its push into AR technology is only part of its step toward amending the cruel and unnecessary testing being done unbeknownst to the everyday taxpayer.

Via these five different tiers, those being $1, $5, $10, $20, and $50, PETA showcases through the AR program five corresponding experiments still being performed to this day. To be clear, the user isn’t spending any money at all. The application and tool are all free for everybody to use at PETA.org/AR. As previously mentioned, all one has to do is hold the particular bill up to the screen and allow PETA to paint the picture that the government doesn’t want to tell you.

At $1, PETA displays the $1.9 million taxpayer-paid program enacted by Shreesh Mysore at Johns Hopkins University. Mysore’s inhumane work focuses on cutting into the skulls of owls and making them experience hours staring at a screen, alongside flashing lights and loud sounds all with nodes attached to their brains. It’s incredibly hard even to imagine such a cruel form of experimentation, but it’s, unfortunately, a reality that taxpayers are indirectly funding. 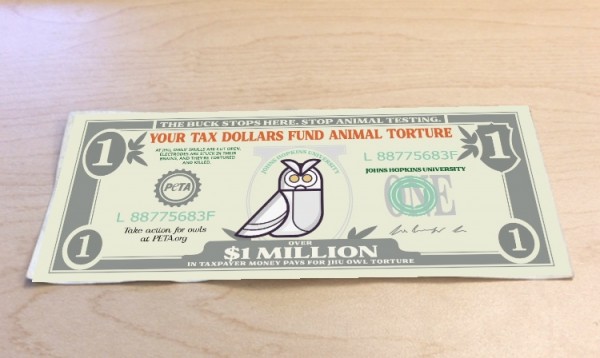 Taking a photo with the $5 bill will highlight Texas A&M University’s $5 million gifted from the National Institute of Health (NIH) for testing muscular dystrophy through the inhumane breeding of golden retrievers. The dogs were kept in barren cages and breed in such a way as to cause deterioration to their muscles. No studies in health should hinge on the wellbeing of our pets.

The AR program by PETA will show at $10 the seven total national primate research centers, wherein monkeys are subjected to incredibly cruel living conditions that spur emotional and frustrating behavior by the animals. PETA relays that these captive primates are prone to biting themselves and pulling at their own fur as they are sequestered to cages barely larger than their own bodies. Over tens of millions of money fronted by taxpayers head these detestable research centers that span the country.

With $20, the aforementioned NIH utilizes a total of $20 billion a year on animal experimentation despite these tests amounting to very little when 95% of effective medications used with animals are ineffective in human trials. It’s added proof that taxpayers are footing the bill for nefarious animal cruelty when the experimentation itself is more than not useless.

Using the AR program with a $50 bill, users are shown how Elisabeth Murray, an NIH experimenter working on the $50 million NIH-funded “monkey fright” tests, uses fake spiders and snakes to terrify monkeys in small cages. The monkeys are subjected to horrifying mental degradation, with parts of their brain is completely destroyed before undergoing the inhumane experiments.

“As US global dominance in science wanes, PETA is pressing for the adoption of its Research Modernization Deal, which outlines a plan to stop the waste of tax money on cruel animal experiments and instead inject funds into superior, human-relevant research methods,” says Guillermo.

While disheartening, grotesque, and plainly despicable to look at, these aforementioned experiments shown via PETA’s groundbreaking AR tool can at least be a message of change for the future in how science can operate more humanely in regards to animal care and decency.