NASA’s SLS Wet Dress Rehearsal Delays to April 4, But Why Did it Scrub the Mission?

NASA delayed the supposed mission of the Space Launch System rocket that should have been doing its wet dress rehearsal for the Artemis I’s preparations for its future launches. The company announced this on its supposed testing, but there were no announcements of the actual date for the rehearsal apart from being this weekend. 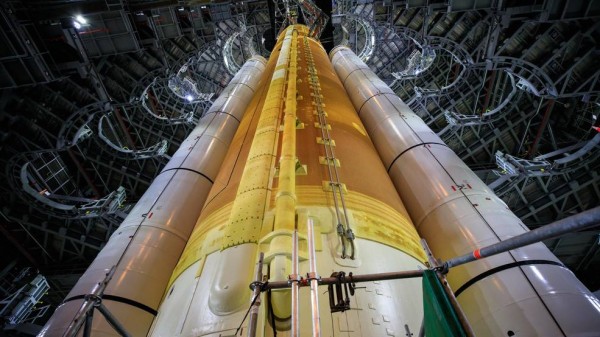 (Photo : NASA/Frank Michaux)
A close-up view of the Artemis I Space Launch System rocket inside High Bay 3 of the Vehicle Assembly Building at NASA’s Kennedy Space Center in Florida on Sept. 20, 2021.

NASA announced that the company scrubbed its April 2 to 3 mission for the wet dress rehearsal for the Artemis I venture. The SLS rocket is now awaiting the national space agency’s go signal for this venture, especially as there have been uncertainties that NASA focused on when it was readying for the weekend practice run.

It is important to note that NASA is only talking about a target launch date by Monday, April 4, and it may or may not happen, depending on the agency’s decision. The company needs to ensure all systems are at a green light to avoid any complications or problems that may further delay the Artemis I mission it aims to deliver as soon as possible.

Why Did NASA Cancel the SLS’ Wet Dress Rehearsal?

NASA canceled the launch because of the mobile launcher’s problems, primarily because of its fans that lost the ability to pressurize its systems to avoid hazardous gasses from escaping. The engineers are aiming to fix this in time for the Monday launch, but it would still depend on its technology and track for when the time comes.

The Artemis Moon mission is a significant venture by NASA for its future space explorations that aims to bring back humans to the lunar surface in the present. The last mission happened decades ago, and since then, humans have not stepped foot on the moon until the upcoming 2024 to 2025 tentative launch dates that will give the public many opportunities.

Note that the dates above are not for human launches, rather it’s uncrewed flights.

Supposedly, NASA scheduled a wet dress rehearsal for the Artemis I’s SLS rocket for this weekend, and it talked about the many possibilities it would open up for improvements and crossing items on its list. However, that faced cancellation but it is not entirely scrapping the venture for the space agency’s future happenings.

NASA is refocusing its mission to a later date, and it will ensure that all systems are working by the time it brings the wet dress rehearsal for everyone to enjoy. The tests would focus on the many aspects of the space rocket for its upcoming mission to bring humans to space, and the company needs to ensure all safety features and functions will bring them to the Moon and back.

Related Article: NASA Brings the Artemis I SLS Rocket to 39B Launch Pad, to Fire its Rockets in Several Weeks