The largest planet in the solar system, Jupiter, just bared the shadow of its biggest moon, Ganymede, in a recent release of a magnificent photo captured from the system based on NASA Juno’s data. 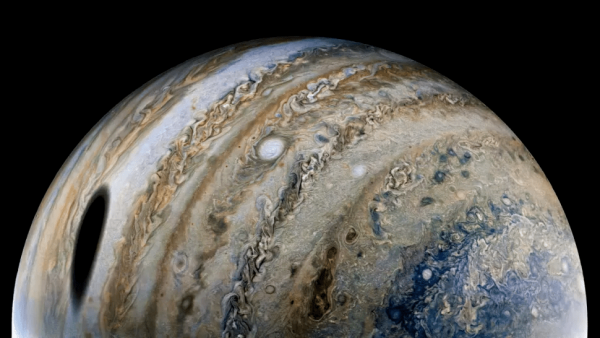 For the 40th time on Feb. 25, NASA’s Juno mission was explored closely by the radiation-spewing planet where citizen scientist Thomas Thomopoulos created this enhanced-color image using raw data based on what was gathered from the JunoCam instrument.

When the raw image was captured, the Juno spacecraft was about 44,000 miles or 71,000 kilometers above Jupiter’s cloud tops, at a latitude of about 55 degrees south, and 15 times near the vicinity of Ganymede, which is orbiting about 66,000 miles (1.1 million km) away from Jupiter.

NASA noted that a viewer at Jupiter’s cloud tops within the oval shadow would be able to witness a total eclipse of the Sun. Since Ganymede is a large moon, total eclipses are common occurrences on Jupiter compared to our planet Earth.

Furthermore, Jupiter possesses four major moons that often pass between Jupiter and the Sun. In a span of seven days, Ganymede transits once; Europa, twice, and Io, four times. Jupiter’s moons orbit in a plane that is close to the giant planet’s orbital plane, hence the moon shadows are often looming on the planet.

Junocam was able to photograph this image from a close distance to Jupiter, which made Ganymede’s shadow appear larger than ever.

Ganymede happens to be the biggest moon in our solar system, which is particularly even larger than the planet Mercury. This is the only moon known to possess its own magnetic field, which produces auroras that circle the moon’s poles.

NASA said on their website that there’s evidence pointing out that Ganymede may hide a liquid water ocean beneath its icy surface. Scientists also believe that the planet’s ocean has more water than all the water on Earth’s surface.

Majority of the giant moon’s craters have bright rays extending from the impact scar, but one percent of its craters have dark rays. The bright pattern around the moon’s spot reminds scientists of the Moon and Mercury.

Scientists also said that the bright spot near the moon’s center is five times brighter than the Earth’s moon, and it may have more bright spots in the surrounding areas.

He added, “by flying so close, we will bring the exploration of Ganymede into the 21st century, both complementing future missions with our unique sensors and helping prepare for the next generation of missions to the Jovian system – NASA’s Europa Clipper and  European Space Agency’s (ESA) JUpiter ICy moons Explorer (JUICE) mission.”

This discovery proved to be crucial in gaining an understanding that, planets in the solar system orbit the Sun instead of the latter revolving around Earth.

NASA’s Juno is on a long-term mission to gain knowledge of the weather and the dynamics of Jupiter. This will enable scientists to understand how large exoplanets may behave in other solar systems.

Juno is still in good health with its extended mission, however, NASA warned that the spacecraft has a limited lifespan because of the radiation that it is absorbing. In 2030s, space scientists are planning to have a mission on Jupiter’s icy moons with NASA’s Europa Clipper and the ESA’s Jupiter Icy Moons Explorer.