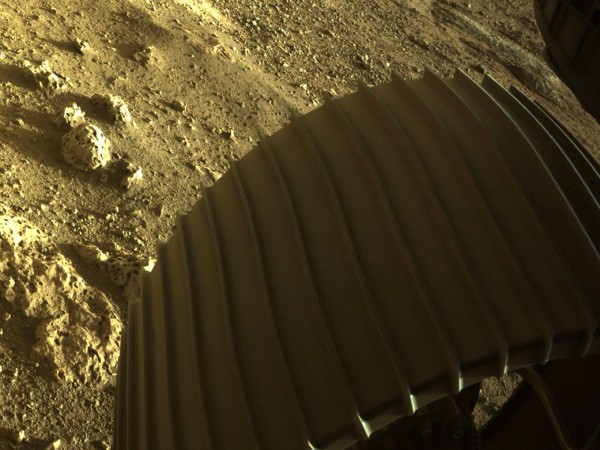 (Photo : NASA via Getty Images)
JEZERO CRATER, MARS – FEBRUARY 18: In this handout image provided by NASA, one of the six wheels aboard NASA’s Perseverance Mars rover, taken by one of Perseverance’s color Hazard Cameras (Hazcams) after its landing in the area known as Jezero crater on February 18, 2021 on the planet Mars.

The images were captured last April 23, when NASA’s helicopter took its 27th flight upon the request of the Perseverance crew.

“Ingenuity not only provides imagery from an aerial perspective, but allows our team to be two places at once on Mars,” said Ken Farley of Caltech, Perseverance’s project scientist, in a statement released by NASA.

“Sending the rover to survey and prospect in one location while launching the helicopter to survey another hundreds of meters away is a great time-saver. It can also help us explore areas the rover will never visit, as in this case,” he added.

The ridgeline or the subject of interest by scientists is called “Fortrun Ridge”, which was named after a parish in Norway.

This ridge is a vital geologic feature of interest since data gathered from orbit, and at a distance by Perseverance, suggests that this is the boundary of two major rock units found on the crater floor.

NASA said that from their previous captures, tilted layers of rock found in Mars are uncommon compared to Earth, where plate tectonics and earthquakes are responsible for tilting.

The recent image will give the science team an opportunity to compare and contrast it with the Flight 27 images, which features the angled ridgeline called “Artuby” located in the “South Séítah” region of the crater.

Through this comparison, scientists hope that they will gain more knowledge on the history of the crater and the forces that ensued in the Jezero Crater billions of years ago.

All About the Ingenuity and Perseverance

The Ingenuity Mars Helicopter is one of the projects spearheaded by NASA’s Jet Propulsion Laboratory (JPL), which is also responsible for the project for NASA Headquarters, and under the support of the agency’s Science Mission Directorate.

NASA announced in March that the Ingenuity’s mission to Mars will be extended until September of this year, continuing its record-breaking flights since the JPL did not find any signs of mechanical downgrade in the helicopter.

Meanwhile, Perseverance’s mission on Mars will be focused on learning about the planet’s astrobiology such as the search for signs of ancient microbial life. The rover is also studying the Red Planet’s geology, climate, and other aspects to blaze the trail for more human exploration on Mars.