NASA’s Ingenuity Helicopter Sees A Wrecked Spacecraft – No, It’s NOT What You Think It Is

NASA’s Ingenuity helicopter has already accomplished so much and taken more photos of the Martian surface than you can count. But this is perhaps among the coolest images it’s ever taken of the Red Planet.

The image features a wreckage. But no, it’s not of an alien spacecraft. Rather, it’s the remnants of the spacecraft that delivered both Ingenuity and the Perseverance rover to Mars back in February of last year, reports Digital Trends. Here is the image taken by Ingenuity on its 26th flight above the Martian surface: 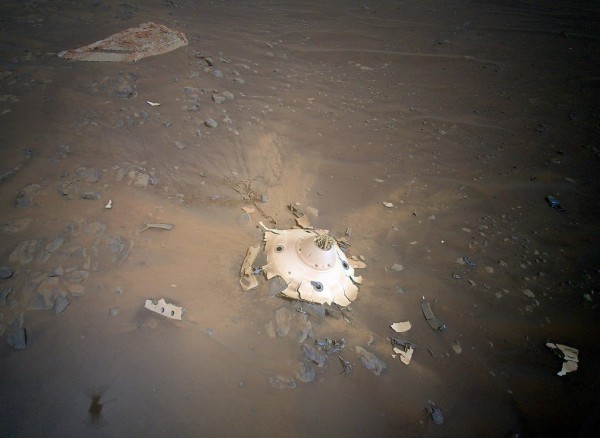 What you can see in the image is the back shell shield that helped protect the Perseverance rover as it dropped onto Mars from orbit. Aside from that, there’s also the remnant of the parachute that slowed the spacecraft’s descent down, so it could land safely on the surface of the Red Planet.

The backshell and parachute hit the ground at speeds of around 78 mph. But despite the rather rough landing, NASA noted that most of the suspension lines which linked the two looked to be intact. This is testament to the results that the agency got from rigorous testing of the landing mechanisms – a critical part of the $2.7 billion project.

Here’s what NASA had to say further about the wreckage:

“Spread out and covered in dust, only about a third of the orange-and-white parachute – a 70.4 feet (21.5 meters) wide, it was the biggest ever deployed on Mars – can be seen, but the canopy shows no signs of damage from the supersonic asiflow during inflation.”

The image was captured during Ingenuity’s 26th flight which once again proved to be a soaring success. A total of 10 color photographs were taken during the flight which occurred on April 19th. As per the NASA Jet Propulsion Lab (JPL), the images were taken from a height of 26 feet (8 meters). Scientists wanted to know how the components performed during the rover’s landing last year, in order to gain more traction for the eventual Mars Sample Return program.

Read Also: Perseverance Rover: What Will Happen to the Rock Samples It Collects?

Of course, there were more details concerning the 26th flight of the Ingenuity helicopter, and they’re all a doozy.

It all started at 11:37 AM on April 19th in local Mars time, which is actually the first-year anniversary of Ingenuity’s historic first-ever flight. For 159 seconds (just under 3 minutes), the tiny Mars helicopter flew 630 feet (192 meters) to the southeast of Jezero Crater where it landed.

But it wasn’t all a single, straight path. Ingenuity’s handlers had to make several aerial maneuvers – a massively difficult feat to perform in the thin Martian atmosphere. After going southwest to take its first picture, it then banked northwest, then finally headed west 246 feet (75 meters) and landed. The total distance covered was a whopping 1,181 feet (360 meters).

So far, the helicopter has already logged 49 minutes of air time and 3.9 miles (6.2 kilometers) traveled.