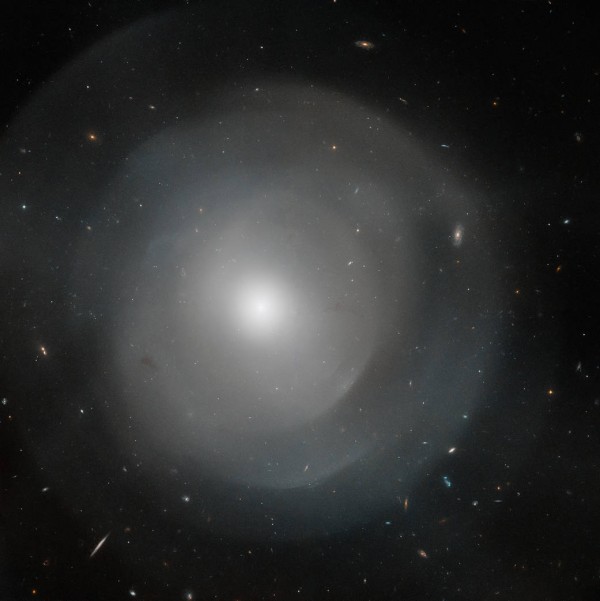 This new Hubble Telescope image specifically highlights the central region of the galaxy NGC 474. This large celestial body is found some 100 million light-years from the vicinity of Earth, it also spans about 250,000 light-years across, which is 2.5 times larger than our very own Milky Way galaxy!

According to NASA, NGC 474 is known for its magnificent series of complex, layered shells that encircle the galaxy’s spherical-shaped core. As seen in the Hubble photo, its layers are very luminous, almost like a glowing silver mist in the midst of a dark space.

The origin of these shells remains to be a mystery but astronomers have formulated a theory that they might be the result of the giant galaxy absorbing one or smaller galaxies, almost like galactic cannibalism!

NASA details that just like the way a pebble causes ripples on a pond when dropped or thrown into the water, the absorbed galaxy triggers waves that form the shells. Hence, NGC 474 is like a rippling galaxy.

This could indicate that these elliptical galaxies have dominated the space where they are located  by cannibalizing all their neighboring galaxies. NGC 474 is alone in a space, which could mean that it had a fair share of galaxies in its stomach.

Furthermore, NGC 474’s distance is about 100 million light-years near the constellation of Pisces.

The captured photo was generated thanks to data from Hubble’s Advanced Camera for Surveys. Furthermore, the gap-filling data was accomplished by Hubble’s Wide Field Camera 3  and Wide Field and Planetary Camera 2. The misty-like glow of the photo is actually a blue light, according to NASA, while the color orange represents the near-infrared light.

The wonders of NGC 474 do not stop with its luminous layers!

NASA also released an image of the gigantic elliptical galaxy back in February 2018 to show a more dramatic and colorful perspective of the giant galaxy as it interacts with a spiral galaxy. 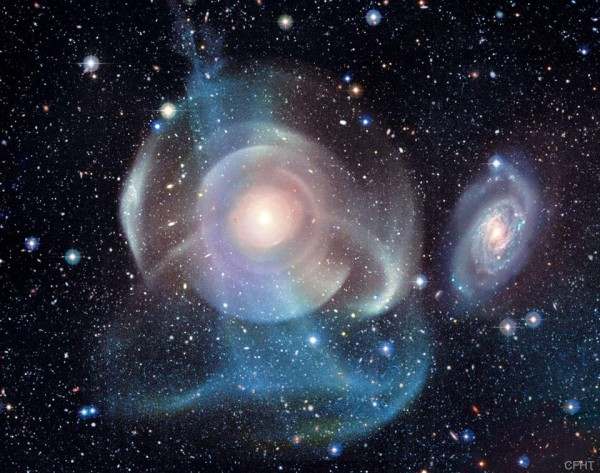 Elliptical galaxies are commonly described by their relatively smooth exterior in contrast with spiral galaxies (the one featured on the left side), which possess more flocculent structures entwined with dust lanes and spiral arms.

The featured image highlights the vibrant shells and star streams of NGC 74, the shells look like ripples in a pond, as it collides with the spiral galaxy above NGC 474, consequently triggering density waves to ripple through space.

The photo holds a significant piece of information since NASA said that it “highlights the increasing consensus” that some elliptical galaxies were formed in the past and that the outer halos of large galaxies “are not really smooth but have complexities” generated by constant interactions and accretions of smaller nearby galaxies.

Our Milky Way Galaxy’s halo is a perfect example of this complexity.