NASA’s Artemis I Wet Dress Rehearsal is Resuming this Week, Focusing on its Core Stage and Propellant Operations

NASA’s wet dress rehearsal is resuming this week, and it will be a modified take on the testing process of the company on their mission for the Space Launch System rocket. The Artemis I Moon mission is a massive venture for the company, and the space agency puts many efforts behind it, even in the initial stages of the mission. 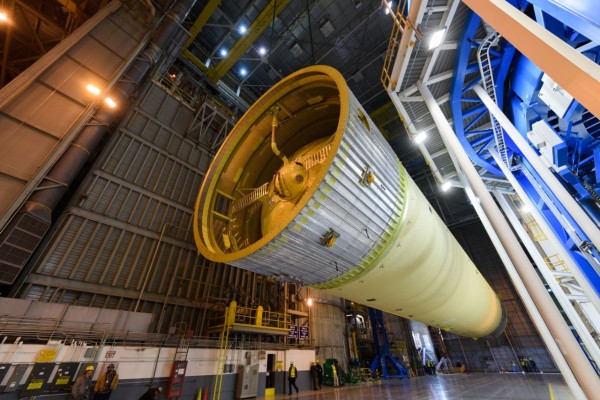 (Photo : NASA)
The Space Launch System is key for NASA to meet the target of sending people back to the moon by 2024, according to agency chief Jim Bridenstine. Production of the megarocket has reportedly been delayed due to budget requests.

The national space agency is also focusing on the minimal propellant operations with the interim cryogenic propulsion stage (ICPS) that NASA aims to focus on in this rehearsal. The efforts of the space agency are to ensure that all systems are ready, using this time to tweak and change several factors that will affect the coming missions.

NASA’s SLS is coming back with Orion to the Launch Complex 39B this week, and it will go from Tuesday, April 12, until Thursday, April 14. NASA said that this will be an opportunity to “refine the countdown procedures” and validate critical models, as it will also look into software interfaces.

The engineers from NASA will also test objectives that are critical to its launch success.

The Artemis I Moon mission is the first time the space agency and humans get to go back to the lunar surface after many decades since its last trip to the nearby space rock. Many ventures focus on the Artemis Moon mission and one of them is NASA’s take on a second company that will build the moon lander for the venture.

The SLS got tested multiple times already, and the company brought many of its rockets to work in the past results of the testing phase of the agency. The Block 1 is a massive venture for NASA and it ensures the first stage of the rocket propulsion that the spacecraft will bring when it is time for the actual mission toward the Moon.

NASA’s wet dress rehearsal may be a lot for the public at this time, and its many delays and resume to bring the agency’s testing process for the SLS rocket. However, it is an important stage for the space agency, and the Artemis I is a venture that the agency builds up to create history for humans’ return to the moon rock.