NASA will hold a media teleconference at 2 p.m. EDT (11 a.m. PDT) on Tuesday, May 17, to provide an update on the agency’s InSight Mars lander. 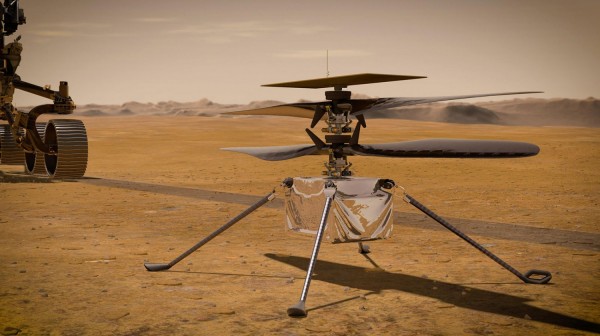 (Photo : NASA via Getty Images)
UNSPECIFIED: In this concept illustration provided by NASA, NASA’s Ingenuity Mars Helicopter stands on the Red Planet’s surface as NASA’s Mars 2020 Perseverance rover (partially visible on the left) rolls away. NASA’s Perseverance (Mars 2020) rover will store rock and soil samples in sealed tubes on the planet’s surface for future missions to retrieve in the area known as Jezero crater on the planet Mars.

The conference will be spearheaded by the mission team members who will feature InSight’s scientific accomplishments, details on its power situation, and plans for the spacecraft’s future.

The discussion will have key NASA figures, including:

NASA noted that in order to participate in the call, the media must RSVP to Rexana Vizza at: rexana.v.vizza@jpl.nasa.gov, no later than three hours before the event starts.

The space agency will be live streaming the teleconference on their website.

The announcement came after the Lander just detected the biggest quake ever found on another planet, which is a monster quake that took place on Mars on May 4 with a recorded magnitude of 5.

After more than three years of listening to the soft rumbles of Mars, I just felt by far my biggest “marsquake” yet: looks like about magnitude 5. My team is studying the data to learn more. Science rewards patience!

The detection is a remarkable feat for the mission team since they have long been anticipating “the big one.” The recorded quake adds to the catalog of more than 1,313 quakes InSight has detected since its inception on Mars.

The strongest previously recorded marsquake was detected last August 25 of last year, and it had a magnitude of 4.2.

It is worth noting that a magnitude five quake is only considered a medium-size quake compared to those that occur on Earth.  However, scientists noted that this is close to the upper limit, and it will be substantial for them to learn more about the interior of the Red Planet.

All About the Insight Lander: Will it be Continued?

Insight was launched in 2018, particularly, it landed in Elysium Planitia, a broad plain straddling Mars’ equator, on Nov. 26. The Lander is equipped with a highly sensitive seismometer built by the French space agency CNES.

This instrument enables geologists to remotely peek inside the planet’s interior by detecting and studying the seismic waves passing through Mars.

This also lets them compare their observations on Mars with their existing knowledge of seismic waves that occur on Earth in order for them to determine the depth and composition of the Red Planet’s geological layers.

In its nearly 1,300 days, Insight has already recorded more than 1,313 marsquakes. The spacecraft’s primary mission already concluded in 2020, but NASA has continued its mission until today.

One of the issues that Lander is facing is that it is struggling to harvest enough solar power to continue operating. In fact, a local dust storm back in January forced the spacecraft into safe mode and raised issues on how long the mission could continue.

Last May 7, the Lander has once again hit perilously low levels of power, according to Space.com.

The teleconference next Tuesday will determine if InSight is still fit to stay on Mars.