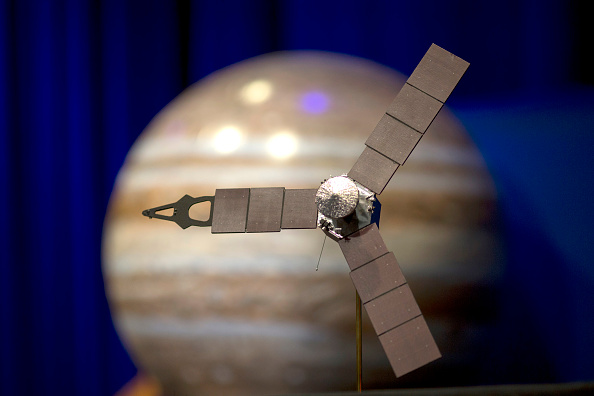 (Photo : Photo by David McNew/Getty Images)
A desktop model of the Juno spacecraft is seen as NASA officials and the public look forward to the Independence Day arrival of the the Juno spacecraft to Jupiter, at JPL on June 30, 2016 in Pasadena, California. After having traveling nearly 1.8 billion miles over the past five years, the NASA Juno spacecraft will arrival to Jupiter.

The National Aeronautics and Space Administration wants to use commercial SATCOM systems to have better near-Earth space communication capabilities.

The space agency explained that transitioning to commercial satellite communications will allow more time for deep space exploration and other similar activities.

According to SciTech Daily‘s latest report, NASA’s new commercial SATCOM goal will be handled by the Communication Services Project (CSP), an agency that pioneers the international space union’s space communications. 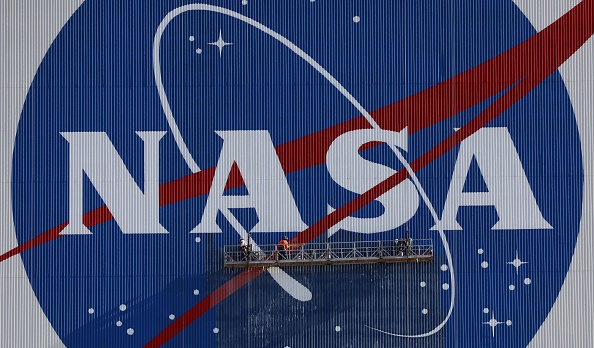 (Photo : Photo by GREGG NEWTON/AFP via Getty Images)
Painters refurbish the NASA logo on the Vehicle Assembly Building at the Kennedy Space Center in Florida in Florida on May 29, 2020. The faded 10-story-tall insignia was last painted 13 years ago. – The SpaceX Falcon 9 rocket with the Crew Dragon capsule is rescheduled to launch to the International Space Station on May 30, carrying astronauts Bob Behnken and Doug Hurley.

Now, NASA can have six American satellite communication companies, which will help it in its commercial SATCOM goal.

These include the following:

These U.S.-based companies will be tasked to meet NASA’s requirement for commercial SATCOM networks. Their innovations will be evaluated around 2025.

If you want to see more details about the new commercial SATCOM network goal of NASA, you can visit this link.

Other Space Innovations of NASA

Aside from the new commercial SATCOM network innovation of NASA, Tech Crunch reported that the space agency is also partnering with Aeva, a LiDAR tech company.

Their new partnership is expected to create a new mapping system called KNaCK. Once this new tech is completed, it can help NASA navigate the unknown surfaces of the moon.

The new KNaCK system is also essential since it can allow the space agency to map the moon without using GPS.

Meanwhile, NASA is now being asked by some U.S. space experts to prioritize Uranus.

Recently, NASA’s Artemis I is now being repaired after a faulty system issue was detected.

For more news updates about NASA and its upcoming space technologies, always keep your tabs open here at TechTimes.

Related Article: NASA Perseverance Rover Arrives at Mars’ River Delta-What Would It Look for on the Dry Surface?