The Sun just bursted an intense solar flare on Tuesday, May 10, which peaked at 9:55 a.m. EDT and NASA’s Solar Dynamics Observatory was there to capture an image of its glorious eruption. 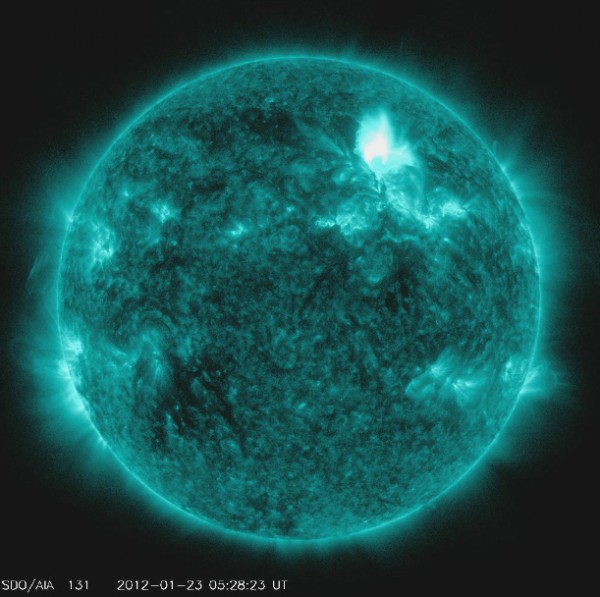 The “Mixed-up” sunspot AR3006, as noted by SpaceWeather.com , is interestingly having an identity crisis.

“It is supposed to have a +/- magnetic field. Mostly it does. But deep inside the sunspot’s primary core, the polarity is opposite.”

This violent solar explosion also spurred a radio emission alert by the National Oceanic and Atmospheric Administration (NOAA), in line with a reported shortwave radio blackout in the Atlantic Ocean region.

SpaceWeather.com said that amplified aurora displays could occur once a coronal mass ejection of charged particles comes out of the AR3006. Its polarity happens to be the opposite of what scientists are expecting, making the sunspot even more “interesting and dangerous.”

According to NASA, solar flares are “powerful bursts of energy” and they can have significant impacts on electric power grids, navigation signals, radio signals, and can even threaten spacecrafts.

AR3006 is classified as an X-class flare, which denotes that X are the most intense and violent flare, while its corresponding number is indicative of its strength.

Today’s solar flare is only a X1.5-class event, which is relatively found at the weak side of the strongest category of flare.

NOAA’s Space Weather Prediction Center, which is responsible for monitoring solar flares and other outbursts, predicted that a coronal mass ejection (CME) may emerge after today’s flare.

CMEs are also considered intense outbursts of solar material that are burped out by the Sun. Through these massive outbursts, scientists will be able to predict whether one will follow a flare from a radio signature.

According to Space.com, auroras relatively occur if a CME happens to intersect with Earth’s magnetic field lines. What usually emerges is a harmless sky show where atmospheric molecules of gas glow.

CMEs can also spell trouble for several infrastructure such as satellites and power lines but scientists note that this is a rare occurrence. But these experts continue to study the space weather via multiple missions gazing at the Sun  to understand further effects of CMEs.

NASA and NOAA are both responsible for monitoring the Sun all the time. NASA has also been operating the Parker Solar Probe Mission, which zips very close to the Sun every now and then to study how its superheated outer atmosphere contributes to various phenomena such as solar flares.