NASA Rover’s Mars Trip Delayed, When Will the Next Launch Be? 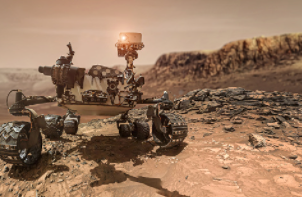 NASA’s rovers have been helpful in exploring Mars, and it is possible that the public won’t have to wait long before the next rover is on its way to the Red Planet.

For years, Mars has become the target of astronauts, scientists and space firms in their attempt to prove that there is life on the Red Planet.

Mars is close to Earth, has evidence of lakes, and may have once sustained life. Besides Earth, it is the planet humans know the most about, and the one that astronomers, scientists, and space firms are eager to learn more about.

One of the reasons for our understanding of the Red Planet is thanks to the advanced NASA rovers. Along with probes, satellites, and orbiters, rovers are responsible for some of the biggest discoveries on the planet.

The Perseverance rover is actively collecting rocks on the planet that will be returned to Earth for further examination and study.

The Curiosity rover has also detected multiple traces of carbon on Mars, which is a considerable puzzle piece in finding evidence of life on the planet.

Thanks to the progress that the rovers have given the experts in their study of Mars, many are now wondering when the next launch will be.

According to ScreenRant’s report, the next Mars rover will be the ESA’s ExoMars Rosalind Franklin rover. ExoMars was supposed to launch in 2020, but it was delayed because of technical issues.

Then, it was supposed to launch in September 2022, but that has been delayed because of the ongoing attack on Ukraine. It is likely that ExoMars will launch in 2022 and ESA has not offered a more specific update beyond that, according to BBC.

The ExoMars rover may launch in 2023, 2024, or even years later. As of right now, all that is known is that the launch will not happen this year, according to CNET.

While NASA and other space firms have launched thousands of satellites in space over the past few years, Mars rovers are very few in comparison.

NASA’s first Mars rover, Sojourner, landed on Mars in July 1997 after three years of development. Sojourner was succeeded by Spirit and Opportunity, both landing on Mars in January 2004.

It was not until August 2012 before NASA’s next Mars rover, Curiosity, arrived on the Red Planet. Almost nine years later, Perseverance become the 5th rover on Mars when it landed there in February 2021. Together with NASA’s 5 rovers, the only other rover on Mars is the CNSA’s Tianwen-1 rover.

Aside from taking a lot of time to finish and aside from the extensive planning behind its development, Mars rovers also cost a lot of money.

NASA spent $2.5 billion just on the Curiosity rover alone. The space agency also spent around $2.7 billion on Perseverance. Whether NASA, ESA, CNSA, or other organization wants to launch a Mars rover, doing so means needing a massive amount of money.

When the costs are added up, it is easy to see why there have only been a couple of Mars rovers launched.