NASA’s Mars Perseverance rover has encountered a mysterious discovery while trekking the Martian terrain. This never-before-seen object has dazzled many scientists studying the Jezero crater.

According to the latest report, the space agency’s robotic vehicle has spotted its own “secret code” parachute. What could this mean for the scientists? 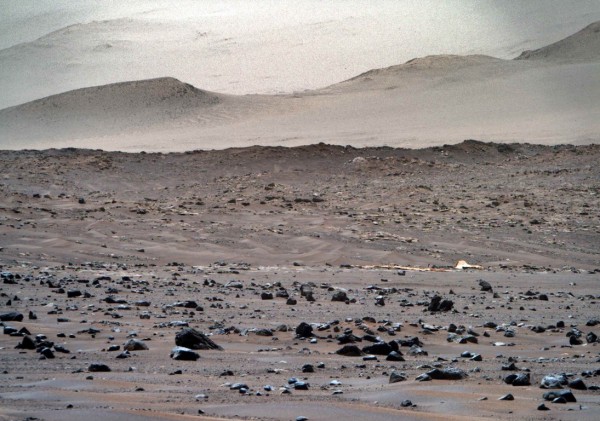 (Photo : NASA/JPL-Caltech/ASU from Unsplash)
NASA’s Mars Perseverance rover has recently snapped a photo of a parachute on a Martian terrain.

Over the past year, the Perseverance rover has been staying in the Jezero Crater in search of potential signs of life forms. Luckily, the researchers have managed to explore the vast lands of the red planet.

Before, the machine had already drilled the dry soil and successfully gathered essential samples, which would be sent back to the planet Earth.

Just recently, the space machine was able to retrace its track in the said region.

The scientists spotted that a billion-year-old river delta existed in the Martian terrain. This convinced the experts that there was water that once flowed into the Jezero crater.

It should be noted that Perseverance has been autonomously operating for some time. It has already spotted a lot of interesting sightings on the planet, including the bizarre rock formations on its lands.

Related Article: NASA’s Artemis I Wet Dress Rehearsal is Resuming this Week, Focusing on its Core Stage and Propellant Operations

This time, the rover snapped raw shots of a parachute that appeared to have been landed on Mars, per IFL Science. According to the engineer who captured the image on Apr. 6, here’s what it looks like.

Kevin M. Gill was the person who processed the images of the “chute.” According to the photographer, the photos were captured on Sol 403 and 404. Those unfamiliar with the term “sol” are the equivalent day on Mars.

The scientists unveiled that the parachute contains a mysterious message in a close-up shot. The team decoded the message and found out its meaning: “Dare mighty things.”

NASA said that it was the motto of the Jet Propulsion Laboratory, which is currently in-charge in carrying out the rover mission.

In another report from Phys.org, the Mars rover was recently spotted to be relying on its self-driving mechanism as it explored the entirety of the Jezero crater.

The consistent movement of Perseverance was attributed to its AutoNav, an auto-navigation system that helps the rover recognize the hazards on its way. In addition, it also guides it en route to its destination on the red planet.

In other news, Tech Times reported that the Curiosity rover retraced its way back on the Greenheugh Pediment because of the unusual terrain it encountered.

The scientists described the area as “gator-back” terrain that resembles an alligator’s hard skins. Since it’s not an ideal place for the wheels because the ventifacts can easily damage them, the team decided to navigate their way back from it.

Read Also: NASA Astronaut Hopefuls, Here’s What You Have To Do (Or Be) To Get In