NASA Perseverance Rover Arrives at Mars’ River Delta—What Would It Look for on the Dry Surface?

NASA and the Perseverance rover, together with its team, arrived at one of the stages of its mission, and it is in Mars’ River Delta. The six-wheeled rover is now beginning its second stage on its expedition on Mars, looking into the then body of water on the planet, investigating the area, and collecting rock samples on the neighbor planet. 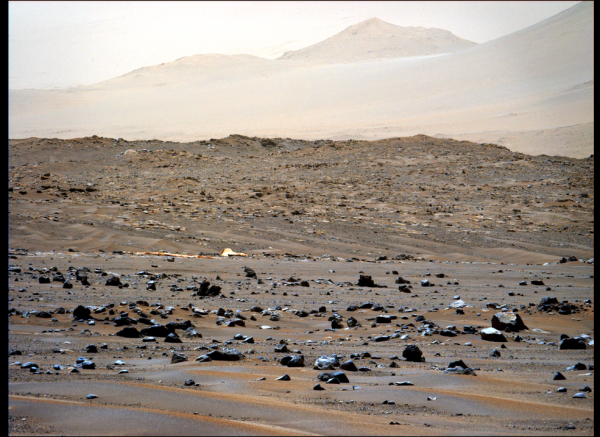 (Photo : NASA/JPL-Caltech/ASU/MSSS)
This image of the parachute that helped deliver NASA’s Perseverance Mars rover to the Martian surface was taken by the rover’s Mastcam-Z instrument on April 6, 2022, the 401st Martian day, or sol, of the mission.

NASA’s Perseverance rover arrived at the river Delta on Mars last April 13, and since then, there have been preparations made by the spacecraft up until this point. Its first expedition and excavation mission began last Monday, April 18, and since then, the rover has been drilling holes at the “Three Forks” area, another name for the Delta river.

The rover’s primary goal is to extract rock cores from the Delta river, and it would be a part of the Mars Sample Return Campaign that Perseverance would fulfill on its end on the neighboring planet. The rover is at its first stage in the operation, but it will soon bring more extraction missions to recover more samples from the area.

Read Also: NASA’s Perseverance in a Rocky Situation Due to Clogged Rocks-What’s Next for the Martian Rover?

New Mission for Perseverance at the Dry River

The new mission for the Perseverance is looking at an ancient river that already dried out millennia ago. NASA’s focus on Jezero and the regions that surround it is focusing on getting to know the planet, as it will help in future missions and possibly, the humans’ first arrival on the Red Planet.

For now, Percy has to collect the rock samples for NASA and bring them in time for its return mission.

NASA’s exploration of Mars does not stop with Curiosity, InSight Lander, and other past rovers that the space agency sent to the Red Planet. The Perseverance’s arrival on Mars is a new venture.

Its goal is to study the Jezero crater and the surrounding areas, with its recent discovery already seeing the crater as a previous lake.

Percy had many missions in the past months that collected rock samples from the Red Planet, and its successful operations have already secured these components from Mars. Now, it awaits the next stage of its operations that will concern the transport of these samples to the home planet for its study and analysis by NASA scientists.

The new area to explore is far from its original landing spot and base of operations, but the rover is already there to begin its mission and look for possible traces of water.

If not, discover what happened to the Red Planet, which once held water on its surface a long time ago, making it a discovery that will provide knowledge on other worlds and give an explanation relating to the Earth.

Related Article: NASA’s InSignt Mars Lander Showcased this Unique Martian Sunrise and You Should Not Miss It