NASA’s Curiosity rover has explored the vast land dubbed “Greenheugh Pediment” on Mars last month. The team noticed that this strange terrain can be explored to a huge extent if they would reroute to the other southern side.

However, the Curiosity team encountered many obstacles along the way. As they moved forward the path, the Mars rover stumbled upon very sharp rocks known as ventifacts. 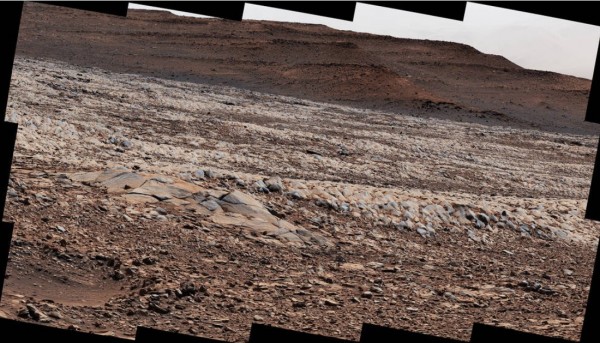 (Photo : NASA/JPL-Caltech/MSSS)
NASA’s Curiosity Mars rover used its Mast Camera, or Mastcam, to survey these wind-sharpened rocks, called ventifacts, on March 15, 2022, the 3,415th Martian day, or sol, of the mission. The team has informally described these patches of ventifacts as “gator-back” rocks because of their scaly appearance.

According to the official report from NASA’s Jet Propulsion Lab, the ventifacts were able to inflict damage on the rover’s wheels upon the visitation.

To combat the wear and tear caused by the rocks, the scientists arrived with the idea of reducing the wheel’s speed using a traction control algorithm. Still, they knew that it was not enough so they decided to navigate the rover back to safety.

So far, that’s the hardest type of ventifacts that the team encountered on Mars. That’s also the biggest hurdle that Curiosity has overcome during the Red Planet mission.

‘Gator-Back Terrain’ Not Good For Wheels

The reason why the team named the terrain “gator-back” is because it resembles the rear part of an alligator which is tough and spiky. Just imagine stepping on these formations so you can have a close feel of what they look like.

“It was obvious from Curiosity’s photos that this would not be good for our wheels. It would be slow going, and we wouldn’t have been able to implement rover-driving best practices,” NASA’s JPL Curiosity Project Manager Megan Lin said.

Furthermore, the path is entirely not suited for vehicle exploration. The team knew that the best thing to do at the moment is to remap a new course for the Curiosity rover.

NASA came up with venturing Mount Sharp. This is the same exact spot where Curiosity went by over the past years. The scientists believed that it can also be the place that might lead them to discover more ancient life forms that once dwelt on the planet.

Phys.org wrote that the Curiosity rover is expected to traverse the path down from the pediment that it has explored before. In this route, it will pass between an area rich in clay and another terrain teeming with minerals, particularly sulfates.

NASA will be taking a safer side here to ensure that the wheels of the rover won’t be damaged by knife-like rocks.

Separately, the space agency’s Ingenuity helicopter team will be looking forward to their next space mission.

Back in February, Tech Times reported that the Perseverance rover spotted an image of a “reclining person.”