The Large Magellanic Cloud had never been this bright and sharp until the infrared eyes of the James Webb Telescope brought us a clearer and more dazzling vision of this galaxy. 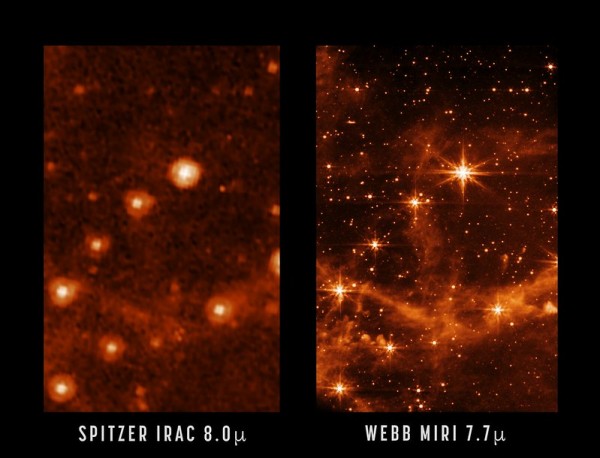 According to NASA, the $10 billion space telescope has achieved the “homestretch” of its commissioning work, and Webb’s latest capture testified to the observatory’s impressive performance using its coldest instrument, which is the Mid-Infrared Instrument (MIRI).

The MIRI image displayed the chemistry of interstellar gas in its sharpest vision. It also showed the emission from molecules of carbon and hydrogen called “polycyclic aromatic hydrocarbons,” which is one of life’s building blocks, according to Space.com.

Chris Evans, the observatory’s project scientist at the European Space Agency (ESA), noted that the clearer view of the Magellanic Cloud would give scientists and experts a chance to study the processes of star and planet formation in an entirely different environment.

This could lead them to a discovery that there is a difference in how each galaxy is formed.

All About the Magellanic Cloud

Captured at 7.7 microns, the photo features a sharp view of the nearby Magellanic Cloud, which happens to be a dwarf galaxy neighbor to the Milky Way. They released this alongside an image taken by the retired Spitzer Space Telescope, a pioneer in producing high-resolution images of the infrared universe.

This indicates how much Webb has advanced and progressed with its stunning captures.

According to Evans, Webb’s sharply detailed and close-up perspective will display “an amazing view” of how a different galaxy operates.

“We’re using the mid-infrared to look through the material that otherwise would be obscured at visible wavelengths,” Evans added, reported by Space.com.

Webb also features a larger primary mirror, advanced detectors, and a high-end observation point compared with Spitzer. The old telescope used to orbit at Earth-sun Lagrange point 2, which is about 930,000 miles away, and as such, it helped the new telescope to further access infrared information with more clarity and accuracy.

Engineers of Webb are now on the final tweaking stages to the instruments, last month they were able to conclude its alignment phase for them to proceed to the science instrument commissioning.

Once all of the stages are done, the telescope will freely peer inside the atmospheres of exoplanets and study how some of the first galaxies were formed after the universe began.

However, officials have not released any information regarding the next commissioning target that Webb will focus on after the testing. But they also emphasized that the observatory is on track to commence its early release science for this summer.

Evans added that when the science instrument commissioning is completed, the instruments will be let loose on the universe.