The Hubble Space Telescope has captured a lot of interesting photos of galaxies in the past. However, it’s not every day that you can see a powerful image of a galaxy that was revealed by two different cameras.

The recently-snapped NGC 1097 “barred” spiral galaxy is situated in the Fornax constellation. It is 48 million light-years away from the earth. 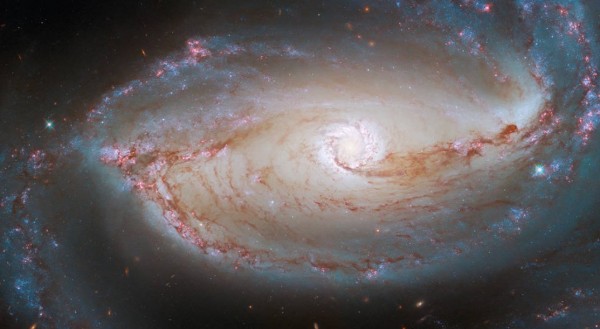 Hubble’s two different cameras have successfully captured an image of this spiral galaxy.

For the past 20 years, the said galaxy has been a home of supernovas which have been under study by researchers.

Particularly, these celestial entities have appeared together with the exploding stars in a series of events. These supernovas which were recognized as SN 1992bd, SN 1999eu, and SN 2003B have been observed for a long time for astronomical studies.

According to a report by Digital Trends, the recent photo of NGC 1097 was beautifully captured thanks to Hubble’s two various instruments: the Advanced Camera for Surveys (ACS) and the Wide Field Camera (WFC3).

It’s quite complicated to think that these cameras should function as one just to capture this galaxy. It should be noted that they need to observe the “similar” target. Later, the astronomers will gather data from both of these cameras.

Hubble Space telescope scientists wrote in NASA blog that this idea involving two different tools capturing an image of a subject is not very “intuitive.” On top of that, they recognized the beauty of these astronomical images upon assembly.

They also mentioned that our eyes have the ability to recognize light waves between 380 and 750 nanometers. In addition, we use three sensitive receptors for this process. They took note that our brain can perceive these as colors.

Galactical Photo is Not Just a Mere Image

“By contrast, a telescope camera like the WFC3 or ACS is sensitive to a single, broad range of wavelengths to maximize the amount of light collected. Raw images from telescopes are always in grayscale, only showing the amount of the light captured across all those wavelengths,” the Hubble team explained.

It’s noteworthy to include that the two space instruments used in capturing a photo of a spiral galaxy also relied on the filters. As such, each of them is important in observing a particular wavelength that corresponds to a specific color. The grayscale model has been generated after.

In order to come up with an aesthetically astronomical image, a combined number of seven filtered photos have been used.

In other news, Tech Times reported that NASA has recently discovered a wandering Chinese space vehicle on Mars. The famous Zhurong rover has been caught on cam traveling back and forth on the red planet.

The international space agency made use of its Mars Reconnaissance Orbiter to capture an image of a solar-powered machine in the dusty region.