The Mars Curiosity rover is known for its unique discoveries, which point out ancient life, among many things. As such, many rock formations appear to be a part of distant life on the red planet.

The latest subject that the robotic vehicle revealed was a bizarre formation that resembles a flower. Could this mean that there was water on Mars a million years ago? 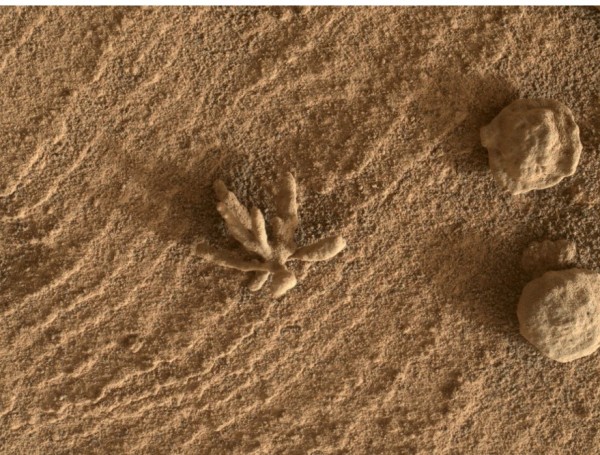 (Photo : NASA/JPL-Caltech/MSSS)
The Curiosity rover has snapped an image of a mineralized flower on Mars. Is this a sign of life that the researchers are looking for?

Space exploration over the previous years has paved the way for experts to comment about Mars’ watery past.

It is to note that many rock formations could hint at such a possibility, although there’s no strong link that could prove that this was true on the other line.

It could be remembered that sometime around 1976, the Viking 1 Lander spotted pyramid-like structures on the red planet.

After a few years since this discovery, it was found out that these pyramids were mirages. The scientists concluded that they were also some natural formations on Mars.

According to a report by The Debrief, the recent image that Curiosity captured was somewhat similar to the photo that the NASA Perseverance rover spotted last month. The latest photograph appears to be a rock formation with a strong resemblance to a flower.

The international space agency wrote on its post that the photo was captured using the MAHLI or the Mars Hands Lens Imager camera. This equipment was situated on the end of the machine’s robotic arm.

Moreover, this photo was issued on Feb. 24, which marks the 3,396th day of the Mars exploration of the Curiosity rover.

We could see that it is somehow a rock artifact that existed a million years ago regarding its uncanny appearance. To add, this might signify that the Martian lands once contained mineral-rich water, as per NASA’s statement.

“Curiosity has in the past discovered a diverse assortment of similar small features that formed when mineralizing fluids traveled through conduits in the rock,” the space agency said.

Flower Formation Not a Sign of Life in Mars

The Debrief also stated that the recent image of a flower captured by Curiosity might not be the “sign of life” that experts are looking at on Mars.

Regardless, it’s still an important piece to be added to their future research regarding the scope of the wet Martian land in the past.

Specifically, the features on the photo could be a guide for the scientists to learn more about the liquid water that was once present in Gale Crater.

In another report from Tech Times, ESA’s ExoMars rover faced another series of delays because of the happening in Ukraine. It was previously set for flight in September 2022.

Elsewhere, NASA gave a green light for the early-stage funding for futuristic tech that could allow humans to breathe on Mars.