NASA’s Space Telescope Science Institute tweeted on Friday, May 13, a throwback to SOFIA’s observation that features a stunning fall of a seamlessly colorful swirl winding towards the Milky Way’s black hole. 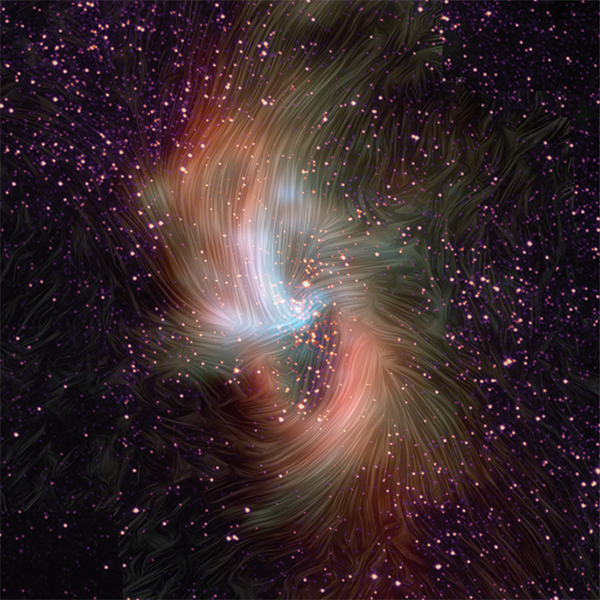 The stunning photo highlights glowing streamlines, which are magnetic fields layered over the dusty ring encircling the Milky Way’s black hole. According to NASA’s Stratospheric Observatory for Infrared Astronomy (SOFIA), the Y-shaped design is a warm material spiraling into the black hole, which if found near where the two arms of the Y-intersect.

Its gorgeous streamlines indicate that the magnetic field closely follows the outline of the dustry structure.

Furthermore, the blue arms holds its own field that is entirely different from the rest of the ring as seen in the pink streamlines. The galactic center dust and magnetic dust of the image was observed by Sofia, while the star field image is credite to the Hubble Space Telescope.

However, what makes this photo strikingly significant is its magnetic quietness. Scientists believe that the magnetic field along the streamlines are muting the black hole.

According to NASA, supermassive black holes are prominent in almost every center of galaxies, most of them are highly active and violent that it gallops multiple celestial materials through the  high-energy radiation it emits during the “feeding” process.

But at the heart of the Milky Way, lies a black hole that is relatively less violent, more quiet, and almost peaceful. This observation by NASA has aided scientists in understanding the differences between active and quiet black holes.

The quietness of the Milky Way’s black hole is attributed to the strong magnetic field that surrounds it. Through SOFIA’s High-resolution Airborne Wideband Camera-Plus and HAWC+, they were able to make this inference.

Magnetic fields happen to be invisible forces that affect the paths of charged particles, their presence are significant because they have influenced the motions and evolution of matter in the universe. But its invisibility is also a great challenge for scientists since it cannot be imaged directly.

Thanks to the HAWC+ instrument, they were able to capture polarized far-infrared light emitting celestial dust grains. It is worth noting that infrared light is not seen by the naked human eye, which makes this photo even more fascinating!

Will SOFIA Continue to Fly?

SOFIA and HAWC+ observations proved to be beneficial in studying how a material interacts with a supermassive black hole, especially resolving the longstanding question of why the black hole in the Milky Way is relatively silent and faint compared to other black holes that gleam brightly.

Unfortunately for SOFIA, it will not be able to conduct these magnificent observations again in the future.

The SOFIA mission will officially conclude its operations no later than Sept. 30 when its current mission extension is finished.

NASA and its partners from the German Space Agency at the Deutsches Zentrum für Luft- und Raumfahrt (DLR), will be halting this mission after eight years of exploring space.

SOFIA costs about 85 million per year for its operation, according to the evaluation of National Academies’ Decadal Survey on Astronomy and Astrophysics 2020. It also highlighted that the science productivity of the mission is not proportional to its huge operating costs.

Hence, the observatory mission will conclude on Sept. 30, which is actually a three-year extension beyond its original mandate.