NASA Brings the Artemis I SLS Rocket to 39B Launch Pad, to Fire its Rockets in Several Weeks

NASA’s Artemis I Moon mission began a new phase on its upcoming ventures as it rolled out the SLS rocket to its designated 39B launch pad at the Kennedy Space Center. The rocket ship would begin its tests in the coming weeks and NASA intends to fire the rocket for the first time, focusing on determining what needs work and ensuring all systems function well.

NASA: Artemis I Mission’s SLS Rocket Rolls Out to Launch Pad 39B 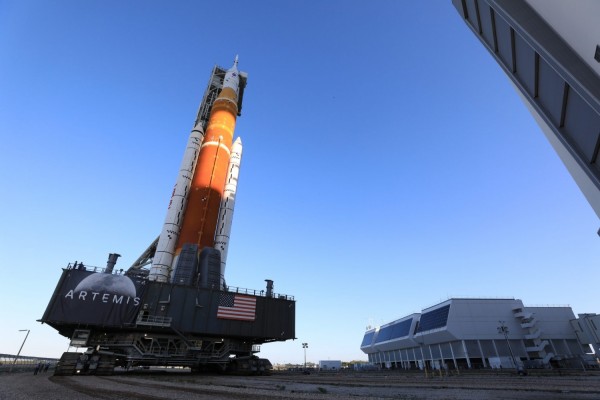 NASA brought the Space Launch System (SLS) rocket to the 39B LaunchPad and it transported the massive rocket and the Orion spacecraft that will sit atop when it starts its mission. The SLS will stand and bring the world the first look at the spacecraft that will soon bring itself to the moon and the passengers that will join the mission.

The Artemis Moon mission is years away from fully committing itself to the launch, and this preparation would focus on the wet dress rehearsal from NASA which is one of the company’s checklists for its flight. The SLS rocket will have to fire its engines and see the many factors that involve the mission, ensuring a safe launch and return for its uncrewed mission.

The national space company is already gearing up for the Artemis Moon mission and they talk about their return to the moon, being close to reaching than before. The SLS rocket would need to travel as much as 1.3 million miles from the planet to the natural satellite, and it will take a beating on its way to the Moon and back to the planet.

NASA and the SLS Rocket for Artemis

NASA is preparing to return to the moon with a new crew and it would feature the first woman to step foot on the Lunar surface, bringing the world back to the satellite after decades. However, its missions faced several glitches when it did its multiple preparations for the uncrewed flight of the rocket, resulting in many setbacks of the spacecraft.

The Mega Moon rocket is the largest spacecraft in NASA’s arsenal now, and it focuses on taking humans and many of its payloads that it will bring to the natural satellite for its crewed flights. The mission would discover more of the lunar rock and perform several experiments that would only be applicable on the Moon.

Artemis I will not happen until 2026 for the launches that will involve astronauts and have the whole world watching for Earth’s return to the Moon after many years. However, it will test its rocket to and from the Moon in the coming moments, focusing on the many requirements that the company needs to fulfill before sending out its team for the mission.