NASA would conduct a “wet dress rehearsal” for the Artemis I mission to bring the SLS rocket to a more in-depth simulation of its actual launch. The national space agency is looking into fueling the rocket and filling up its tanks, and starting its launch sequence that will simulate how it would do once it begins the actual flight for the company.

NASA Artemis I Wet Dress Rehearsal to Happen This Weekend 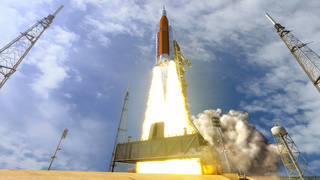 (Photo : NASA)
NASA¹s Space Launch System rocket will launch with Orion atop it from Launch Complex 39B at NASA¹s modernized spaceport at Kennedy Space Center in Florida.

NASA targeted this first week of April’s weekend to start the wet dress rehearsal for the Artemis I mission’s tests and simulation to look into the SLS rocket’s capabilities. The rocket might even fire up its engines this weekend, showing the might of the giant rocket in NASA’s possession now, focusing on ensuring its systems are working.

The agency’s briefing talked about the process of its wet dress rehearsal to happen soon, and it will be available for the public to stream and see what is the Artemis mission’s status.

The wet dress rehearsal is the closest thing that the public can see for the Artemis I’s mission in the present, as the company is not yet launching it with its uncrewed mission for its first trials.

The public may witness the intricate steps in the vehicle’s launch, and it is a significant test that will take everyone into its actual process without actually flying the vehicle in the present. The actual flight may occur later this year, focusing on the liftoff that will look into the Artemis’ capabilities for its crewed mission.

The focus of this setup is to prepare the rocket for its future tests and trials that will focus on dress rehearsals and the upcoming launch of the mission.

Of course, the crewed mission will not arrive for the agency until the end of this decade, focusing on a 2030 launch for the Artemis crew that will bring back humans to the Lunar surface. There are many factors and elements that NASA is still considering regarding its return to the Moon mission, and the agency will take its time to ensure all is well.

NASA will have its earliest touchdown on the Moon by 2025 with an uncrewed mission.

The Artemis mission is a massive deal for NASA and all the companies involved in making it happen, partnering with various private companies for this venture, including SpaceX and more. The SLS rocket is awaiting the decisions of NASA for the upcoming tests and launch it will perform, particularly as it is readying for the mission.