More Earth-bound solar flares are expected to happen, as claimed in the new database of CESSI (Center of Excellence in Space Sciences India). 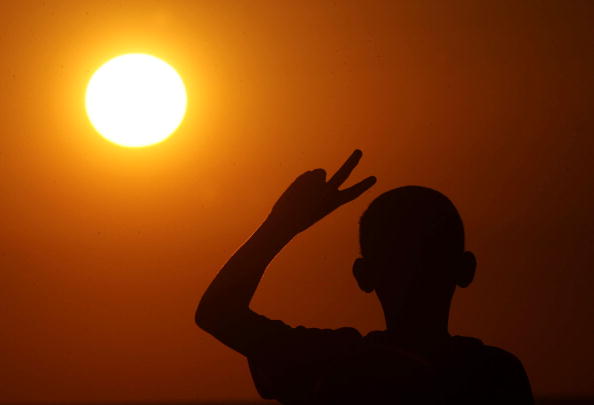 (Photo : Photo by Abid Katib/Getty Images)
A Palestinian boy gestures a V-sign as he looks at an Israeli tank (not shown) open fire while guarding the border of the vacant Jewish settlement of Neve Dekalim September 7, 2005 near Khan Younis Refugee camp, in the southern Gaza Strip. Palestinians await the complete Israeli withdrawal from the settlement in Gaza.

These radiation emissions of the Sun are commonly harmless since the planet’s atmosphere can easily dissolve them before they can even reach the surface.

However, some strong CMEs can still lead to negative effects. They can disrupt satellite communications, GPS systems, and other similar technologies. 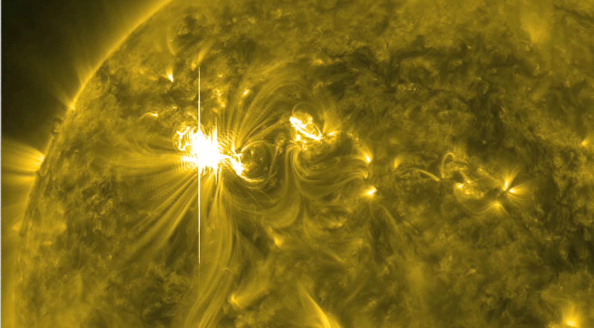 (Photo : Photo by NASA/Solar Dynamics Observatory (SDO) via Getty Images)
In this handout from NASA/Solar Dynamics Observatory (SDO), a X5.4 solar flare, the largest in five years, erupts from the sun’s surface March 6, 2012. According to reports, particles from the flare are suppose to reach earth early March 7, possibly disrupting technology such as GPS system, satellite networks and airline flights.

The information they gathered from the Sun revealed that there were two X-class solar flares, as well as 13 M-class CMEs, that happened since Apr. 15.

“High-frequency communications blackout expected to be localized over the Asia-Pacific region as estimated by the @NWSSWPC DRAP model,” said CESSI via its official Twitter post.

The M class flare earlier this morning from solar AR 12993 resulted in moderate ionospheric perturbations; high frequency communications blackout expected to be localised over the Asia-Pacific region as estimated by the @NWSSWPC DRAP model. pic.twitter.com/yYuZt1bHFZ

All these details just show that the Sun’s surface is becoming more active. Because of this, CESSI and other space experts now believe that there will be more high-intensity Earth-bound solar flares that will happen in the following days or months.

Why Are Solar Flares Becoming Common?

These two Sunsport swarms have larger sizes compared to Earth. Researchers explained that these dark areas on the Sun’s surface are the main sources of CMEs.

They create massive electromagnetic radiation bursts, which then turn into solar flares. Now, the AR2993 and AR2994 regions are expected to create more CMEs.

Space scientists stated that the solar flares might peak around 2024.

Meanwhile, a new solar flare created some bright Aurora lights back in 2021.

On the other hand, NASA was able to capture mid-level solar flares, which alarmed SWPC.

For more news updates about solar flares and other related space topics, always keep your tabs open here at TechTimes.

Related Article: Solar Flares: How Will it Affect Human Life? Northern Lights May Be Affected by Event