Kawasaki made a rideable electric goat, and the company released this for the world to see via the International Robot Exhibition in Tokyo, Japan. Instead of a bipedal human that resembles the method of humans by standing on their two feet, it stands on all fours. Unlike humans, the new Kawasaki Bex robot is a quadruped device that owners can modify to anything fully modular. 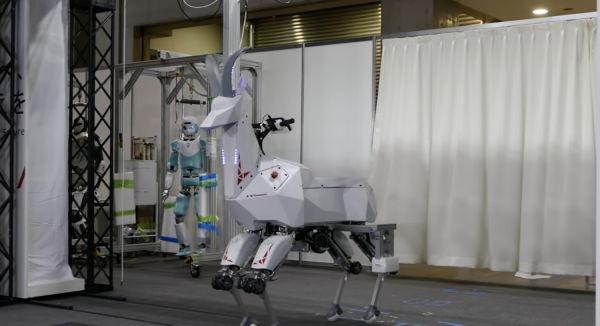 According to an online video posted via YouTube by Kazumichi Maruyama, Kawasaki’s take on the IREX 2022 event in Tokyo is to bring a rideable goat as its latest innovation for mobile machines. The device resembles the Ibex, a wild goat usually found in mountainous regions of East Africa, North Africa, and Eurasia.

Kawasaki named this the “Bex” and is a quadruped robot that walks on all four legs and has been a long-term project from the company since 2015. The Bex came from the Kaleido Program. Its focus is to give the world a robot that can perform multiple tasks by carrying the load and transporting it, even for mountainous regions.

Read Also: Nanorobots of About 200 Nanometers Wide Can Remove Microscopic Pollutants in the Water

Kawasaki Bex: Fully Modular and Can Carry Up to 220 lbs.

The robot from Kawasaki is fully modular and may be modified into whatever animal it can resemble, apart from the Ibex goat, which the company featured in its showcase. The machine’s capabilities make it carry up to 220 pounds (99 kilograms), and it is almost twice or thrice its weight.

Kawasaki’s Bex is for the heavy workloads, especially in carrying humans and equipment along mountainous regions and factory setups.

Robots are meant to make human lives more manageable, and it is through the service they give to the professional that uses them, and in some cases, for the public. One of the most basic examples here would be the robot surgeons that successfully performed an unsupervised operation on a pig without any human assistance or intervention.

Not all creations are perfect and bring many features for a user in this current setup. Research and development are still underway for robots, especially now that people are starting to accept their existence on the current landscape where tech and science are integrating themselves into the many aspects of life and everyday needs.

Some robots in the present development are all for independent uses, as some are exosuits developed to help workers carry loads more effortlessly and efficiently.

Different robots and tech developments are available now to help humans in their everyday life, and not all are meant to have a conscious life or awareness to do their jobs. Some robots are still modeled to work under remote control, something which the Kawasaki Bex aims to bring to the public, with its fully modular state that may or may not feature an Ibex goat.