Humongous Shock Wave in Space is Bigger than the Milky Way Galaxy, But What Are They?

Researchers discover a humongous shock wave in space and the size of it is on an enormous scale, with the study seeing it larger compared to the Milky Way galaxy to which Earth is residing. The shock wave is massive energy that is close to the speed of light and its presence is a phenomenal one that gave researchers new insight into what is happening in the universe.

Humongous Shock Wave: How Did it Form in the Universe? 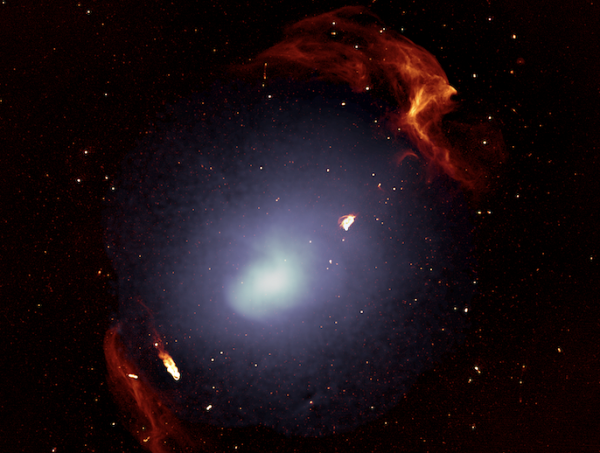 The MeerKAT radio in South Africa helped researchers discover a shock wave unseen before and its size is a significant one in the galaxy now. The research entitled “MeerKAT view of the diffuse radio sources in Abell 3667 and their interactions with the thermal plasma” details where the shock wave came from and how it formed.

Researchers from the South Africa Radio Astronomy Observatory (SARAO) of the National Research Foundation detailed that it came from two massive galaxies colliding with each other. The shock waves are larger than the Milky Way galaxy and its energy is something close to the Big Bang, and it is a theory of a massive scale that changed the way this universe works.

Shock Wave Bigger than the Milky Way: Will it Affect Us?

The cluster called Abell 3667 is only forming say the researchers, but it will soon have its completed effort to form its humongous shock wave with an estimate of 550 galaxies associated with it. The shock wave brings a diameter of 100,000 light-years, and the shock wave stretches to as much as 6.5 million light-years.

The shock wave may affect the planet if it ever reaches our system, but that is currently unknown.

Different space phenomenons are the focus of different studies and research, bringing the world knowledge for the many happenings in outer space that could potentially bring a change in our existence. One study involves the WASP-121b which was discovered by a team using NASA’s Hubble space telescope and it is an exoplanet that rains liquid gems.

A new data map was also under observation from researchers regarding the violent activity of the Milky Way towards other galaxies and systems. The phenomenon is something to look out for as the form of activity may mean that changes might happen and affect the current life on Earth, but it also may not as time goes by.

It is important to note that the shock wave that manifested and showed massive energies is a result of two galaxies colliding with each other and creating the blast. It may have happened long ago and not recently, but it now manifests itself as seen by the astronomers, and it may reach the planet in the coming years.

The Milky Way’s violent activity may also lead to this happening.

Related Article: NASA Hubble’s New Captured Image Shows ‘Space Triangle’-Here’s What It Is and How It Formed