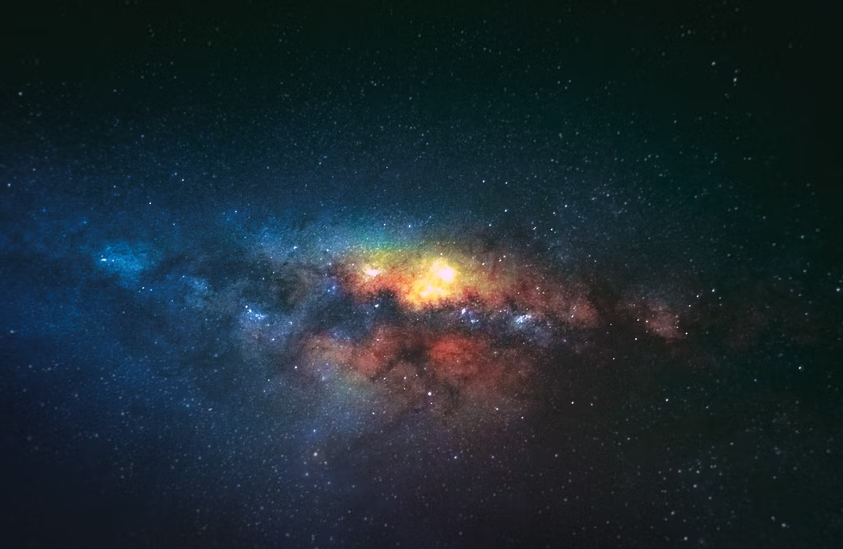 The Hubble Space Telescope captured many dreamy images of two merging galaxies in the VV-689 system.

Also called the “Angel Wing,” the stunning photo shows the galaxies symmetrically aligned as they smash together, forming what looks like a space being flying against the darkness.

NASA noted that the image is part of a citizen science project called Galaxy Zoo. The project employs the space-loving enthusiasm of volunteers who help NASA comb through vast amounts of data and pictures sent back from the telescopes.

Since its launch back in 1990, the Hubble Space Telescope has captured the most stunning pictures across the galaxy, according to Mashable.

It has captured portraits of giant planets like Saturn and Jupiter, imaged dream-like nebulas, and more, giving astronomers the information needed to make great discoveries about the universe.

The Angel Wing — a nickname given to the two merging galaxies in the VV-689 system — is this week’s #HubbleFriday. The galactic interaction gives the impression of a vast set of galactic wings.

In honor of the space telescope’s 35th anniversary on Apr. 24, NASA released a snapshot of five galaxies called The Hickson Compact Group 40 or HCG.

The group is nestled into a region of space that is less than twice the diameter of the Milky Way’s stellar disk. The experts suspect the quintet is in the process of merging into a single giant elliptical galaxy, according to Elizabeth Howell from Space.com.

The merge is expected to take a billion years, and the pictures give researchers a chance to study galactic evolution.

The cluster features three spiral-shaped galaxies surrounded by orange and thick dust clouds, a lens-like galaxy on the lower right, and an elliptical galaxy towards the top, all caught in a compact gravitational dance, according to the report from David Nield of Science Alert.

While the tight groups of galaxies are not rare at all, they are mostly found at the heart of massive galaxy clusters. However, the HCG is near the constellation Hydra, and it sits unusually isolated from anything else, making it a great study target.

More than 100 compact galaxy groups have been spotted during the sky surveys going back several years, but the quintet is the packed one.

Astronomers believe that tightly packed groups were more common in the early universe and provided fuel for powering black holes.

Scientists suspect that HCG may have formed this way because of the dark matter in the galaxy or the substance which interacts mainly through gravity with visible matter.

Once the starry regions come closer together, the dark matter can develop into a cloud covering the group that slows the galaxies down, according to Science Alert.

When the galaxies lose energy, they will fall. Studying densely packed galaxies could help astronomers understand where, when, and how galaxies form.

Astronomer Paul Hickson, from the University of British Columbia in Canada, said in a statement that when he rediscovered the galactic group in 1982 after sifting through the Atlas of Peculiar Galaxies produced by Halton Arp in 1966, he only used a massive plastic ruler and a magnifying glass while looking over the sky survey prints.

In 2016, the Hubble Space Telescope captured a solitary dwarf galaxy.

In 2021, the Hubble Space Telescope captured the outer plants, and the pictures were released.