To celebrate its 32nd anniversary, the Hubble Space Telescope released a photo that captured a unique group of merging galaxies that will eventually transform into a singular entity.

This eclectic bunch of galaxies is known as the Hickson Compact Group 40 (HCG 40). It includes three spiral-shaped galaxies, an elliptical galaxy, and a lenticular (lens-like) galaxy that are in the process of becoming one elliptical galaxy, according to a statement released by Hubble on Tuesday. 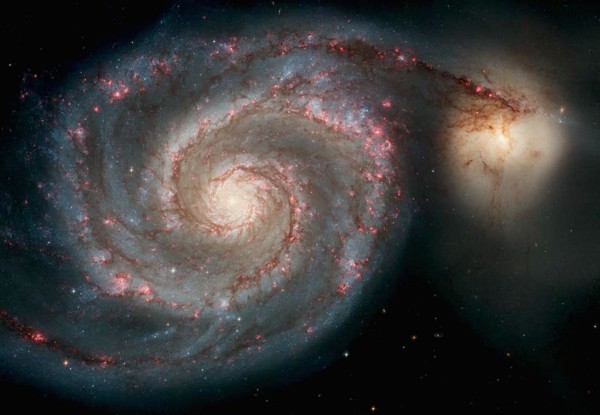 Captured in a “leisurely gravitational dance,” this group of five galaxies is particularly isolated in their own small patch of the universe, somewhere in the direction of the constellation Hydra, which is known as the largest constellation in the sky.

Scientists have long been cataloguing more than 100 compact galaxy groups, however HCG 40 stands out as the most densely packed. Hubble believes that compact groups like this may have been common in the dawning of the universe and that “their superheated, infalling material may have fueled very energetic black holes,” also known as quasars.

The study of compact groups like HCG 40 helps astronomers and scientists to understand how galaxies are formed.

Hubble further explains that there could possibly be a lot of dark matter within these galaxies, and when they are close together, the matter becomes a big cloud within the galaxies’ orbit. Due to its gravitational effects, galaxies receive a resistive force from the dark matter, which leads them to lose energy and fall together.

Their astronomers have also studied these compact groups not just with visible light but also with the use of radio, infrared, and X-ray wavelengths.

“Almost all of them have a compact radio source in their cores, which could be evidence for the presence of supermassive black holes,” Hubble officials said.

They added, “X-ray observations show that the galaxies have been gravitationally interacting due to the presence of a lot of hot gas among the galaxies. Infrared observations reveal clues to the rate of new star formation.”

It is rare to find single and isolated galaxies in the universe since they tend to form clusters or groups. A system that consists of two galaxies is called a “binary galaxy.” For a dozen or more galaxies, are called a “galaxy group.” While a larger assembly constitutes a “galaxy cluster.”

If members of a group of galaxies are found in a small space, they are likely to interact gravitationally and emerge slowly as one. Hence, they are called mutually attracted galaxies.

The Hubble Scope Telescope was launched on the space shuttle discovery last April 24, 1990, in pursuit of understanding the evolution of the universe. Despite its age and synchronization issues last year, the telescope remains to be working.

However, NASA is looking forward to pairing Hubble’s work with their recently-launched James Webb Space Telescope, which is expected to be finished around June.