Eutelsat is now accused of helping Russia control disinformation. If this is true, then the country really allowed the Russian government to spread its propaganda in the country. 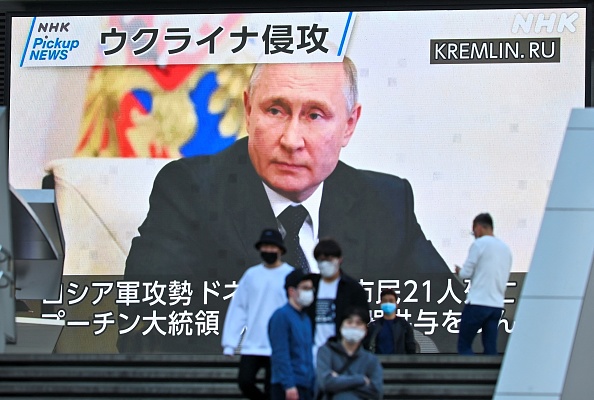 (Photo : Photo by KAZUHIRO NOGI/AFP via Getty Images)
Pedestrians walk past a screen displaying Russian President Vladimir Putin during a news broadcast about Russia’s invasion of Ukraine, in the Akihabara district of Tokyo on May 4, 2022.

The Fren satellite operator signed a five-year deal with the Kanal PIK, a broadcasting group created by Georgia. However, the Kremlin-independent television station was suddenly dropped by Eutelsat.

According to The Wired‘s latest report, Kanal PIK tried to have a spot on the list of Eutelsat. However, the independent media agency failed to do so. 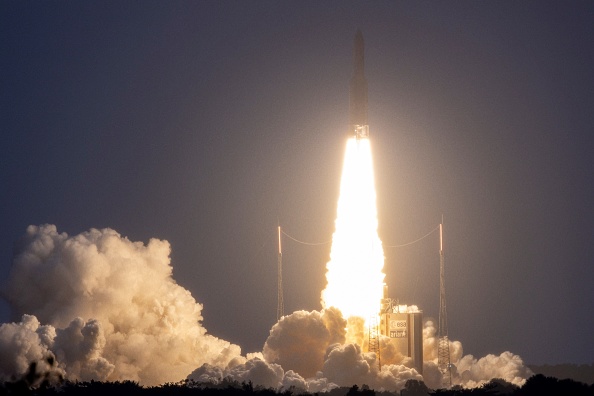 (Photo : Photo by JODY AMIET/AFP via Getty Images)
This picture shows an Ariane 5 rocket carrying two telecommunications satellites, Eutelsat Konnect and GSAT-30, lifting off from its launchpad in Kourou, at the European Space Center in French Guiana, on January 16, 2020. (Photo by jody amiet / AFP)

Also Read: Russian Law Firm to File a Lawsuit Against Apple for Shutting Down Apple Pay in Russia

Because of this, the publishing companies and media agencies dependent on the Kremlin’s editorial line are free to spread their news in Russia.

Experts said that Eutelsat is actually allowing them to do this. They added that the French satellite operator is promoting Moscow’s official propaganda, which commonly contains disinformation.

As of writing, the French satellite operator hasn’t confirmed if it will really remove NTV+ and Tricolor.

Jim Phillipoff, a former satellite TV executive and ex-Kyiv Post CEO, explained that it would be a great deal if Eutelsat removed the Russian-backed media companies.

“And there’s a lot of exiled Russian journalists who would love to be a part of free television which is getting into Russia,” added the Diderot Committee member.

On the other hand, Phillipoff said that one of the independent television companies that the French satellite operator should support is the TV Rain, an independent Russian news station that was closed down by Moscow.

If you want to see more details about Eutelsat and the disinformation in Russia, you can visit this link.

On the other hand, a major Ukraine internet provider was recently breached.

For more news updates about Russia and the disinformation issue happening in the country, always keep your tabs open here at TechTimes.