The Defense Advanced Projects Research Agency (DARPA) successfully flew a Black Hawk that featured a technology called “ALIAS” that made the helicopter self-flying. The mission flew 30 minutes without any humans inside the cockpit and safely landed back to the surface without any problems encountered during its test flight. 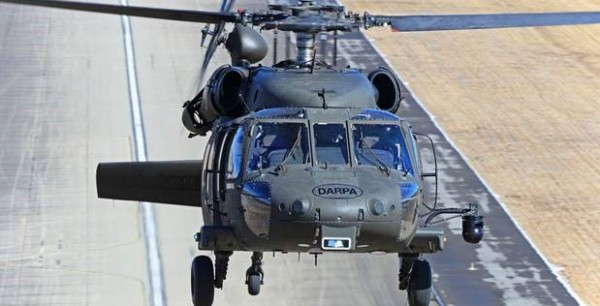 (Photo : DARPA)
DARPA ALIAS powered Black Hawk takes on the skies without any pilot, completing a more than 30 minute test flight that looked into its capabilities as a system for the aircraft.

DARPA said that ALIAS’s first flight without any humans or supervisors onboard was successful and it brings a milestone for the technology in modern times. The Aircrew Labor In-Cockpit Automation System (ALIAS) was fitted on a UH-60A Black Hawk helicopter that is best known for its use in the US military.

The ALIAS is different from the typical “autopilot” system that holds the altitude, maintain the course, and speed of the rotors to continue flying it for the pilot. The system is a fully-automated one that helps in navigating different places without the need for operators or pilots, only its remote control that connects via a signal.

DARPA Self-Flying Helicopter: Intended for Soon Use on Missions

Lockheed Martin’s Sikorsky and DARPA previously took on the same mission that focused on ALIAS’s system and flew the helicopter to test its autonomy. However, the previous mission from last year focused on having a safety officer aboard and that person had the responsibility to oversee the mission and be there in case of an emergency or accident.

DARPA prides itself as the innovations leg of the US Military and Defense, aiming to bring the new technologies possible to advanced and modern warfare for the troops. One of its most ingenious innovations is the vehicle wheels that can change shapes while installed on a car, adapting to different terrain or needs in its situation.

The researchers also focused on bringing prosthetic attachments dubbed as “Luke Skywalker’s hand” as they present it to be “life-like” and adaptive. Those prosthetics were first given to injured veterans that lost several limbs on the battlefield due to their service to the country.

The agency prides itself as the one that brings innovation to the country’s defense, bringing tech into practical situations.

The new feature of the Black Hawks would effectively make them a vehicle that will serve a lot of purpose for the military and even in the homeland for its uses. Self-flying vehicles may be common, but DARPA’s system can turn any helicopters or the like, into autonomous machines with its new ALIAS that will test more in the months to come.