China claims that the Space Junk, which is expected to crash to the Moon next month, is not from their previous Chang’e-5 T1 lunar mission way back in 2014.

The denial of the Chinese Ministry of Foreign Affairs comes after the upper stage debris of the 2014 lunar mission of China was accused of being the space junk that is heading towards the Moon this March, as per a recent report by SpaceNews.

Thus, the spokesperson of the Foreign Ministry of China, Wang Wenbin, spoke on the matter in a press conference in Beijing, denying that the space junk debris hitting the moon is from their previous lunar mission.

On top of that, Wenbin also claimed that the booster from the 2014 Chang’e-5 T1 mission has successfully reentered the atmosphere of the Earth in “a safe manner.” After which, the upper stage of the rocket has also been “completely burnt up” since then. 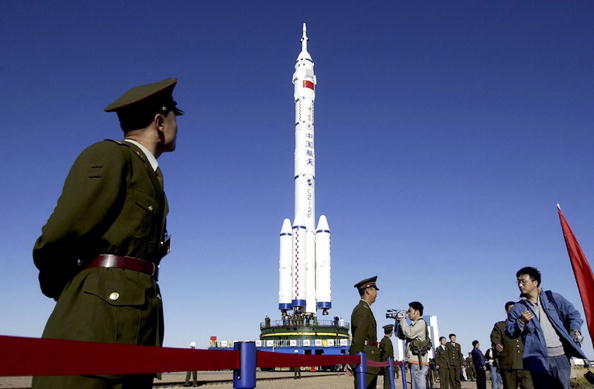 (Photo : Photo by China Photos/Getty Images)
Military soldiers stand guard as the Shenzhou VI spacecraft, sitting atop of the LM-2F carrier rocket, is moved towards the launching pad in Jiuquan Satellite Launch Center on October 7, 2005 in Jiuquan of Gansu Province, northwest China. China will launch its second manned space flight on October 12 from the center, after a crucial ruling Communist Party meeting concludes in Beijing October 11. The Shenzhou VI will carry two astronauts and orbit the earth for five days, according to state media.

Thus, the Chinese Foreign Ministry says that the space junk headed towards the Moon could not be from its 2014 lunar mission.

What’s more, the spokesperson also clarified that all of the aerospace missions of China have consistently been “keeping with international law,” according to a news story by DailyMail.

Read Also: NASA Vs. China Space Race to Become Nuclear Competition! Here’s What This Atomic Energy is Capable of

Space Junk to the Moon

The space debris, headed towards the surface of the Moon, was first discovered by an Astronomer, Bill Gray, way back on Jan. 21, warning that an object is set to collide with the natural satellite of the Earth.

Initially, the astronomer said that the space junk heading to the moon is from a SpaceX Falcon 9 launch way back in 2015.

However, on Feb. 12, Gray revised his previous findings, saying that it turns out to be from the upper stage of the Long March 3C rocket stage, which was used during the Chinese Chang’e-5 T1 moon mission.

NASA also echoed the claim from its own analysis, which showed that the space debris is from the space mission of China.

But the latest denial of China still makes the space debris flying towards the surface of the moon an ongoing mystery.