Putting an engaging and impactful mission at the forefront of its business, Air Company proposes among the aptest ways in combating climate change: vodka. More specifically, vodka is made primarily from the carbon dioxide-filled air around us, which has only skyrocketed in levels over the past several decades to its extreme.

This is the basis behind Air Company’s mission of harnessing CO2 to deliver some of the most interesting products, like hand sanitizer, perfume, and the aforementioned vodka. The company was just awarded $30 million in series A funding on Tuesday, Apr. 19th, with the goal of only strengthening its foothold on proprietary carbon technology.

Air Company considers itself the global leader in carbon-based tech, deriving some of the most innovative products using nothing but the air around us. Conceived in 2019, the brand came out swinging with its own rather interesting beverage called Air Vodka, which no sooner took the world by storm.

But, Air Company had to shift into sanitization as the pandemic hit in 2020 casually. Creating a hand sanitizer was actually quite an easy feat with its already existing knowledge in alcohol designs made via carbon dioxide.

“During the pandemic, we put out a sanitation product – a hand sanitizer that we’ve donated throughout New York and across the US. The funding that we’ve brought on is to really help scale those products to meet demand because we’re constantly selling out of all the products that we produce,” explains co-founder and CEO of Air Company, Gregory Constantine. “We also want to begin our transition into industrial sectors, so that we can really have a massive impact of scale.”

Air Company utilizes state-of-the-art in-house machines that blend solar energy, water, and carbon dioxide into pure ethanol. It has its own facilities, two of which are its main functional distributors, with a third on the way that will amp up production of its Air Vodka, sustainable fuels, and CO2 ethanol via the company’s largest to-date carbon-harnessing system. 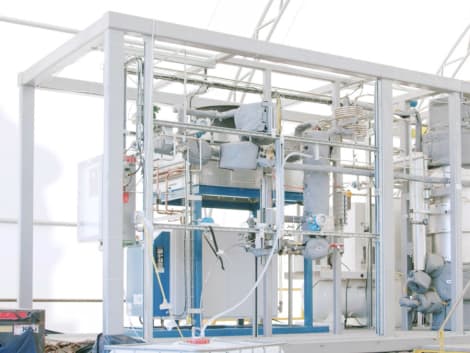 Chief Technology Officer and co-founder Dr. Stafford Sheehan vies to bring as much an end as is possible to the ever-growing tide of climate change through increased output and streamlined product pathways. He details even further:

“Our immediate goal at Air Company is to further improve and scale our technology that converts carbon dioxide into the cleanest, lowest carbon intensity alcohols for consumer products, on the path to industrial applications. Ultimately, we aim to truly have an impact toward addressing climate change by utilizing waste and atmospheric carbon dioxide to displace fossil fuels at-scale; replacing the carbon that we currently extract from the ground, with carbon removed from the air.”

Air Company has already saddled up with the likes of NASA to produce applicable fuel alternatives for rocket propulsion using alcohol-based sugars and proteins. It vies to amend a total of 10.8% of global carbon dioxide emissions at a potential annual volume of around 4.6 billion tons of carbon dioxide.

Adds Constantine, “If we can contribute to the protection of our planet through the advancement of technology and innovation, then we are doing our job.”

Read Also: Paper-Free 2022 Guide: Here are Some Eco-Friendly Digital Habits You Can Do